Playtime in Pussyland by Louis Wain,verses by Norman Gale (Father Tuck's“Wonderland” Series). Paperback book/booklet published by Raphael Tuck & Sons Ltd (no date, early 20th century), unpaginated with monotone and colour illustrations. (Cover describes the book as “Untearable”. The pages are made of paper and cotton stuck together. One of the pages has started to pull apart (see photo).). (The book measures 27cm across and 21.5cm down and is a few milimetres thick.  There are 14 pages with page one being on the inside front cover and page 14 on the inside back cover.) 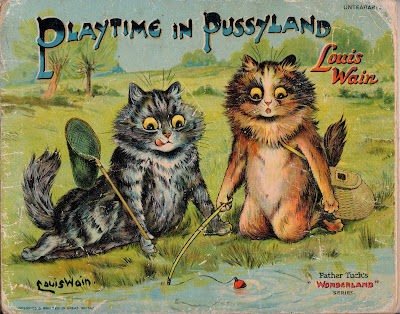 This is one of those books where I really had no idea... I mean REALLY no idea. Sure, one can be aware of Louis Wain and aware of his collectability and then you come across something like “Playtime in Pussyland”... which is such a great title, but a title that is sadly missing from many bibliographies... which I guess is probably because it is so incredibly rare.

Louis had a penchant for drawing cats. Yep, he drew a lot of large eyed anthropomorphised pussycats over his long life (1860 – 1939). You could even say he had an obsession with drawing cats... at least that's what many people thought and still think about Louis's legacy. Part of the overall mystique surrounding Louis is that he was eventually locked up for mental health reasons which were probably somehow associated with cats. He did manage to continue drawing despite personal setbacks and in later years started producing some distinctly psychedelic pictures of... you guessed it, cats. There's a lot of discussion on the interwebs about whether he was crazy or just obsessed and there's even one theory that he became schizophrenic due to a parasite in cat poo!!! ?* 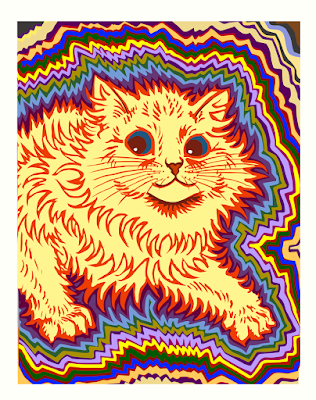 A later cat picture by Louis Wain (not in this book)

This book is in worn condition. It is a kids book and was obviously played with, pondered and amazed over by many children over its lifetime. To avoid damage the publishers Raphael Tuck & Sons Ltd decided to make the book “untearbable” which suprisingly it has managed to do over it's life. I find the damage that is present quite interesting and the photos below demonstrate some of the long term wear and age that the book has undergone. 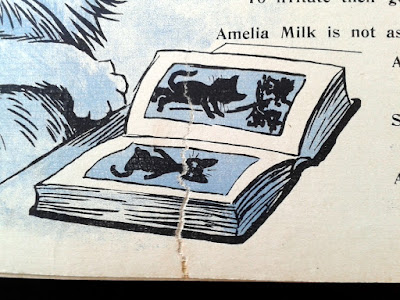 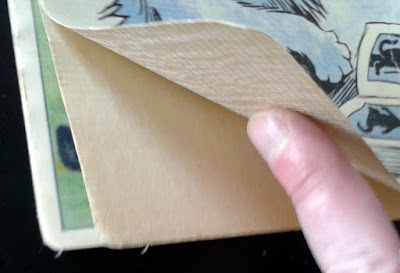 The photo with what looks like a rip is actually the paper splitting over the top of the “untearable” backing which in a few spots has come apart demonstrating why the book is untearable.

This copy of Playtime in Pussyland is the only copy I can find currently for sale on the internet. It is seriously rare and something that I am proud to be able to offer to buyers. Whether it sells or not, is another thing. What I particularly like is that I have learnt something new... even if it does involve cat poo.