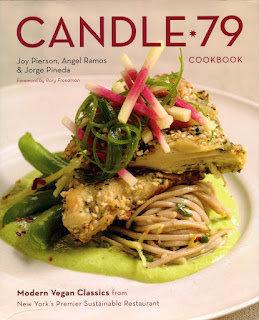 “Continually rated as one of the best vegan restaurants in the country*, Candle 79 is at the forefront of a movement to bring elegance and sophistication to vegetarian cuisine. Not only is its fare local, seasonal, organic, and sustainable, but also so flavorful and satisfying that customers—vegan and omnivore alike—are constantly asking for recipes to cook at home. This collection answers that call, with simple yet impressive recipes for Chickpea Crepes, Ginger-Seitan Dumplings, Live Lasagna, Chocolate Mousse Towers, Cucumber-Basil Martinis, and more. Expanding the horizons of vegan fare with appetizers, soups, salads, mains, brunches, desserts, cocktails, and wine pairings, Candle 79 Cookbook invites every home cook to make truly green cuisine.”

I'm not thinking of taking the Vegan plunge. Nope, not for me. I did once commit to becoming a vegetarian... and lasted about 3 days (it might have been less)... I think it was bacon that turned me back so quickly. I am happy to admit that some of my favourite foods are vegetarian and even Vegan food does appeal to this omnivore. Looking at the list of recipes above who can't be impressed with the words Ginger-Seitan Dumplings and flicking through the book there are many tempting things that this hungry bookseller is tempted by, even if there isn't a skerrick of any long suffering dead animal in any of it.

Over the years I have encountered many distraught chefs/cooks concerned with what they are going to serve their Vegan friends or family. My mother was one of them. I remember one year it was about October when she told me she was having trouble sleeping because she didn't know what to cook for one of her grand children, a recent convert, at Christmas. Unfortunately, there isn't a lot of Vegan fair in traditional German christmas dinners, hence her concern. Rather strangely i've heard of other families of all shapes and ethnicities, having the same problem with Vegetarians and Vegans. One guy I knew told me he ate from the one quiche (vegetarian not vegan) for over a week one christmas whilst visiting his parents in country New South Wales. Personally, I think a Vegan christmas cookbook could be a best seller as, from my experience, this is when non vegans need these recipes the most.

I know more than a few Vegans that I am happy to sit down and break bread with... and I think with a cookbook like this one ethically hovering around their kitchens, I could be tempted to break the vegan loaf a little more often.