Zombies vs. Unicorns, compiled by Holly Black and Justine Larbalestier.


“It’s time to decide: Team Zombie or Team Unicorn? A must-have anthology with contributions from bestselling authors.  It’s a question as old as time itself: Which is better, the zombie or the unicorn? This all-original, tongue-in-cheek anthology edited by Holly Black (Team Unicorn) and Justine Larbalestier (Team Zombie), makes strong arguments for both sides in the form of spectacular short stories.” 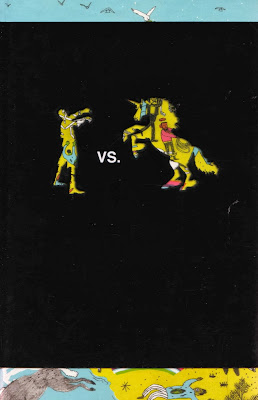 It’s amazing how many people have an opinion on this one.  I was recently visiting some friends and the issue just happened to pop up in conversation… as it often does… and of course you get a room full of people (4 of us) and there will be varying opinions.  Up front was a good friend of mine Dave.  A horror fan of many years, Dave’s answer was a little predictable which is fine,  we need all opinions and a broad spectrum is a good thing in any group of people.  So that’s 1 vote for Zombies.  The big question was which way would his daughters swing and also a little predictably they swang to the Unicorn, although the eldest (6 years old) did seem to consider the question seriously and hesitated before her unequivocal reply in favour of Unicorns.


Now I’m not sure if all of this is representative of gender or age, although I’ve got a feeling it’s both… and I’ve also got a feeling that it doesn’t really matter.  We had a bit of fun for a few seconds discussing the benefits of each and it held my interest enough for me to remember this conversation whilst looking at this book ‘Zombies vs. Unicorns’.  I think the same bit of fun is the purpose behind this book.  But if you are serious about Zombies and Unicorns and want to know the truth…
Posted by robin at 12:19 AM