The Secret Life of Wombats by James Woodford.

The Secret Life of Wombats by James Woodford.  Paperback book published by Text Publishing 2001, 229 pages with a few colour and black and white photographs and illustrations. 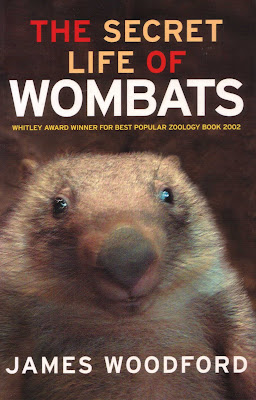 “In 1960, a fifteen-year-old schoolboy called Peter Nicholson began to investigate the secret world of wombats by crawling down their burrows and making friends with them. These torchlight adventures have since inspired a generation of scientists, and his research is still considered useful today.”

Look at that cute picture on the cover.  That’s how you sell a book.  You find something cute and fluffy and whack it on the cover.  Fortunately in this instance, the picture is related to the subject.

I’ve never crawled into a Wombat burrow but I have seen some and they are enormous and the idea of a skinny 15 year old crawling into one is plausible.  Personally I can’t really figure out why you would want to, but I’m not a skinny 15 year old, so what would I know.

…well, there is something that I know about Wombats and that is that if confronted in the wild (probably with young wombats nearby), they will attack.  Yes, a ferocious wombat, I will avoid using the word “killer”, attacked a good friend of mine whilst she was sight seeing in Victoria’s alpine region.  Not only did it go for her, it drew blood… not a lot, but enough for me to mention it here.  Needless to say, this story is usually recounted in a lighter form, but the truth is that a wombat did attack her.  Since this vicious blood drawing event, I have had the pleasure of briefly holding a baby wombat at another friends house.  It was an orphan and they were looking after it for a few days.  I got an invite to come around and have a look and I was there in 10 minutes.  They are cute and cuddly (the wombats, not my friends) but also incredibly strong and determined (…facts based on my 5 minute visit).  ...and this little baby didn't draw blood.

I haven’t found any other books about wombats, so this one was a must.  It also won an award for best popular zoology book in 2002.  Whether you are a wombat or have been attacked, held, or have an interest in wombats, this book should be of interest to you.  I haven’t seen any wombats or burrows around here, but I do know that if I do, I wont be crawling into it.
Posted by robin at 1:32 AM