Bang!: The Complete History of the Universe by Brian May, Patrick Moore and Chris Lintott. 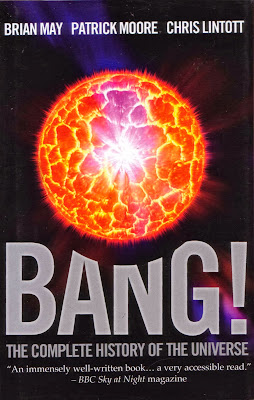 “BANG! Space, time, matter... the Universe was born 13.7 billion years ago. Infinitely small at first, it expanded more rapidly than anyone can contemplate. Brian May, Patrick Moore and Chris Lintott explain how all this came about, from that moment when time and space came into existence, to the formation of the first stars, galaxies and planets, and to the evolution of human beings able to contemplate our own origins and ultimate destiny. Then on towards that destiny in the infinite future, long after the Earth has been consumed by the Red Giant Sun.”


The complete history of the universe in 144 pages!!!  144 pages isn’t really a lot of pages, particularly if you start thinking about the 13.7 billion years that are covered by this book.  Even 50 shades of Grey has more detail, so I can only assume that this is probably a condensed version of a long, long story and the authors have left out some very, very boring bits that just go on and on forever (billions of years).*  But let’s face it, we, the reading novice astronomers of this planet, only really want to know the juicy bits and this book sets out to do just that.  It avoids all that boring maths stuff that I, and probably others, don’t understand and goes straight for the jugular avoiding the times when not a lot was happening.

(he’s the one with the rollers… now I understand why his hair was always so curly) can have time to be so knowledgeable about Astronomy.  I guess when you’re a rock legend there is quite a bit of downtime and besides taking lots of drugs and getting into trouble as some rock stars do, Brian decided to spend his time studying and writing about the Universe. There are two other guys who helped him write this book and both of them aren’t rock stars, although flicking this book they understand quite a bit about the life of the stars.


*Maybe 50 shades should have done the same thing.
Posted by robin at 2:41 AM