Three Men in the Snow by Erich Kästner.

Three Men in the Snow by Erich Kästner.  Hardcover book published by Jonathan Cape 1938, 256 pages with an unpaginated publishers catalogue at the end of the book. 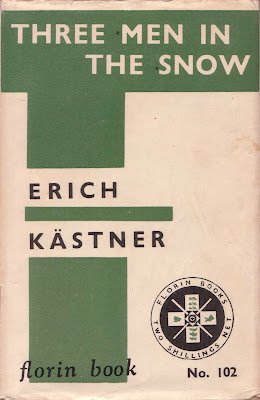 One of the benefits of being a bookseller is that I can read a book before selling it.  When I found this gem by Erich Kastner this is exactly what I did.  Erich Kastner was a German writer most well known for his childrens books.  Like a surprisingly large number of people that I have recently mentioned the name Erich Kastner to, I read a number of these books in my youth.  Who can forget “Emil and the Detectives”, “Emil and the Three Twins”, “Lottie and Lisa” or “The Little Man”.  I certainly haven’t and when I found this book my attention was immediately drawn to it.
I hadn’t read this particular title before, although for some reason it seemed vaguely familiar.  I’m still not sure why this is.  I assumed it would be a childrens book and it was only when I started reading it that I found out it wasn’t… at least I think it wasn’t.  Regular readers of this blog are aware that I tend to use the interwebs quite a bit to do research on various things to do with my work, but in regards to this volume there was very little information.  In other words, I was unable to find out anything regarding this title.  There’s probably heaps of information in German, but my German is not that good and I certainly am unable to easily decipher a long treatise on “Three Men in the Snow” in Deutsch… and let’s be honest, it’s not that important.  What I did find out was that this period of Kastner’s literary career was not a very happy one.  For various reasons he had fallen out of favour with the Nazis and wrote a number of books that were apolitical so as to avoid any further issues with Adolf and his book burning friends.  This was obviously not a happy time for Erich yet he was still able to write this charming story.
Interestingly this English translation was published in Britain in 1938 and is a reprint of a 1935 edition.  I don’t think I need to go into the details about British German relations at this point in history… and if your not aware, well… let’s just say it wasn’t very good.  As far as I can tell there are no other editions of this book other than the 1935 and 1938 editions.  As I mentioned above, many of Kastner’s other books were incredibly popular in the Anglosphere after WWII.  Having read the book, I sort of understand why this one hasn’t remained in print.  Don’t get me wrong, it’s entertaining and very readable, but it is a little fluffy and keeping in mind his other excellent works, it’s certainly not an Emile.  What it is though, is rare.
Posted by robin at 2:52 AM