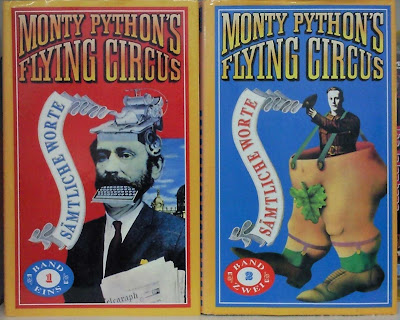 (Yes, I’m well aware that the brackets above contains a quote from a completely different TV series which is not Monty Python, but with some artistic license due to the obvious link, I thought it might be appropriate in this instance.)
In the past i have shared a few words of wisdom regarding some items of interest that for various reasons, I have chosen not to purchase.  I’ve also on occasion mentioned the difficulty in selling books that are published in foreign languages in a country where the… ummm… language of the book is foreign.  I seem to keep falling into the trap of purchasing great titles in other languages and then not being able to sell them and I have vowed to be a little more discerning regarding this matter.  So when I found this 2 volume hardcover set of Monty Python sketches in German, I was finally able to control my urge.  Indeed, I didn’t whip out the cash, choosing instead to whip out my phone and take these pictures.  My reasoning was that it would make a great post on this blog and not a great thing to have sitting on my shelves. 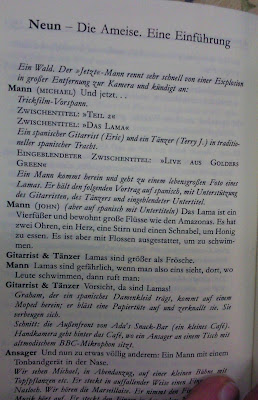 Humour translated into another language is an interesting concept.  Sometimes it works incredibly well and sometimes it doesn’t.  As an English speaker, Monty Python is an interesting phenomenon to consider how well it could translate into any foreign language.  I have heard that Monty Python is/was incredibly popular in Germany and there are numerous clips on youtube of sketches dubbed into Deutsch and I guess this is some sort of indicator as to the popularity of this sort of thing.
I think that I don’t really need to mention the near impossibility of selling a German translation of Monty Python sketches here in Australia… but I should mention that I was tempted to give it a go.  Some habits are hard to lose.
Posted by robin at 3:40 AM