Kryal Castle by Kenneth Stepnell and Esther Stepnell.  Hardcover book with pictorial boards (no dust jacket) published by Rigby 1976, unpaginated (approx 31 pages) with colour photographs throughout.
(Kryal Castle is an Australian replica medieval castle located on a foothill of Mount Warrenheip at Leigh Creek, just north of Dunnstown and 8 km east of Ballarat. It was built in 1972 and opened to the public in 1974 by Keith Ryall, who gave the castle his namesake, having made his fortune selling body armour.  This book contains mostly photographs of the castle and the activities that went on there in 1976.) 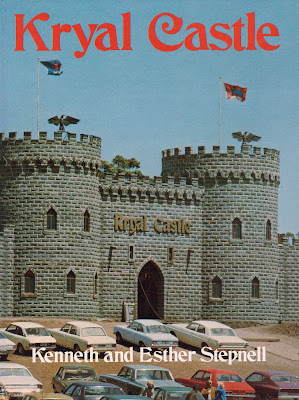 A few years ago a cousin of mine from foreign lands visited me here in Australia.  As a good host should, I made sure that we got out of the big cities and saw some of the wonderful Victorian countryside including some of its excellent smaller towns.  Heading towards Ballarat we were about to pass the Kryal Castle turnoff when I made a spontaneous decision to detour via this spectacular tourist attraction.
I like a bit of adventure and I like to surprise people, so I deliberately did not explain where we were going or what we were about to see.  So we’re chatting away and all of a sudden he stops talking and is staring at: 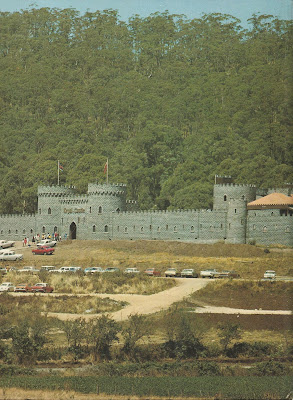 …which in retrospect is what I would expect from anyone who had no idea that a medieval castle replica is sitting here in Victoria not far from Ballarat.  I should also add that it is full size, in other words, it’s big.  Anyway, we pull up out the front, probably where those cars are parked in the picture above, and his jaw has seriously dropped.  He then laughs and exclaims how weird the whole thing is.  30 seconds later we were back on the road to Ballarat.
The reason I mention this rather brief yet insightful visit, is that every time I pass the castle (it’s not that far from where I now live) or when I find a book about it (this is the only one I have ever found), I think of his reaction and I must add that I have had pretty much the same reaction whenever I see it or read about it or think about it (which is not very often)… or write a blog entry about it.
Let’s be honest here, there’s a certain amount of absurdity to the whole thing.  I get the whole idea of the tourist trap thingy and people having an interest in all things medieval and I even get it that someone had the idea to make money from the fascination, but to have a castle plonked out there in a field just outside Ballarat… it’s a little weird. 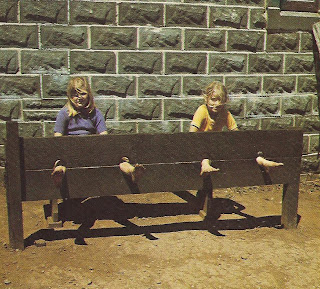 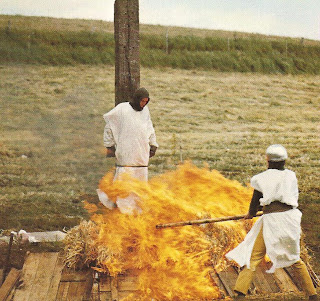 Some of the fun activities at Kryal Castle
In recent years the Castle was up for sale and at one stage the only serious prospective buyers were some brothel developers from Melbourne.  The idea was that the castle would make an excellent themed brothel/resort.  The owners (who apparently live next door) declined the offer.  I believe there are now new owners and Kryal Castle will be reopening later this year.  In the meantime anyone wanting a fix of medieval absurdity in the Victorian countryside may have to do with this book.
Posted by robin at 3:01 PM