The Girl from the Fiction Department: A Portrait of Sonia Orwell by Hilary Spurling.

The Girl from the Fiction Department: A Portrait of Sonia Orwell by Hilary Spurling.  Hardcover book published by Hamish Hamilton 2002, 194 pages with some black and white photographs and a few black and white illustrations. 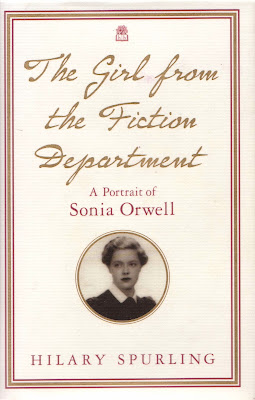 I’m not really a fan of the Literary Biography and over the years I’ve learnt the hard way that these titles don’t really sell that well on line.  A bit like fiction, which as much as I can, I try to avoid listing on the interwebs.  I’m not sure why they don't sell and of course there are exceptions to my negative take on Literary Biography and Fiction.  I guess I’m writing from personal experience and that experience has lead me to the conclusion that “they don’t really sell that well on line”.
So here is a biography of a literary persons wife… sorry, second wife.  Yes, Sonia married Eric Arthur Blair, also known as George Orwell, three months before his death from tuberculosis.  There’s a whole heap of debate about this three months of marriage business and then him dying which I wont get into here.  The author of this book, Hilary Spurling, was a friend of Sonia’s and wrote this book “to set the record straight”.  Good on her.  I’d like to think that there’s a Hilary Spurling out there who one day would set the record straight in regards to myself.
After Eric/George passed away, Sonia married Major Michael Augustus Lane-Fox Pitt-Rivers and this is where things get really interesting.  Michael Pitt-Rivers was involved in a very public trial for buggery.  He ended up in prison for 18 months.  She also had numerous affairs with various prominent British painters including Lucien Freud but always said that the French phenomenological* philosopher Maurice Merleau-Ponty, was here true love.  During her busy and eventful life, Sonia was a fierce protector of Orwell’s Estate and helped set up the George Orwell Archive at University College London.  Which sort of doesn’t really go along with the opportunistic implications that a three month marriage could imply.
All I can say is that Sonia was a busy woman and definitely a woman of interest.  Yeah, the Orwell connection was probably Sonia’s most famous claim to fame, although anyone into phenomenological philosophy or buggery** may disagree with this assertion.
*?
** The court case that Michael Pitt-Rivers was involved in led to the Wolfenden Report, “which in 1957 recommended the decriminalisation of homosexuality in the United Kingdom” (Wikipedia).
Posted by robin at 2:36 AM