Brush Up Your Russian by Anna Semeonoff.

Brush Up Your Russian by Anna Semeonoff. Hardcover book (stiff boards) with pictorial boards (no dust jacket) published by J.M. Dent and Sons 1942, 101 pages with black and white illustrations. 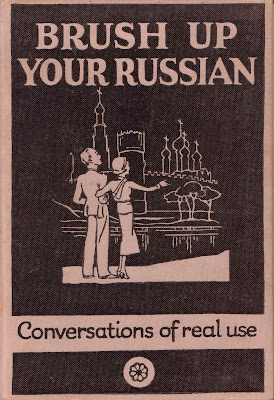 I’ve recently tackled French and Esperanto, it’s now time for some Russian.  It’s 1942 and the good people of J.M. Dent decide it’s time to publish a refresher course of Russian.  In 1942 the Russians were the friends of the British… well sort of… and what better way of creating harmony than a book exploring the Russian language through the visit of some rather rich looking people to Mother Russia. 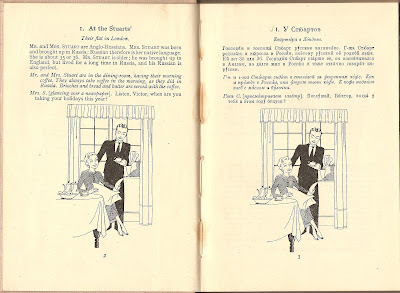 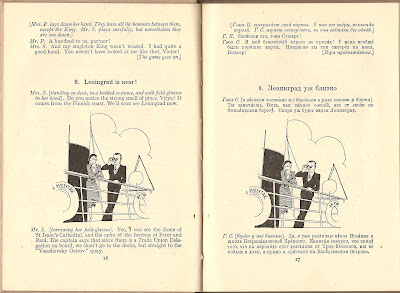 I particularly like the way the book has the story in both English and Russian, reprinting the excellent illustrations with each of the languages.  Just look at these beautiful people and their joy at the prospect of re visiting Russia (apparently they had lived there previously).
Mrs. S. Listen, Victor, when are you taking your holidays this year?
Mr. S. In August; why do you ask?
Mrs. S. I’ve just been reading in the paper that there are so many excursions to Russia.  Why shouldn’t we go too? 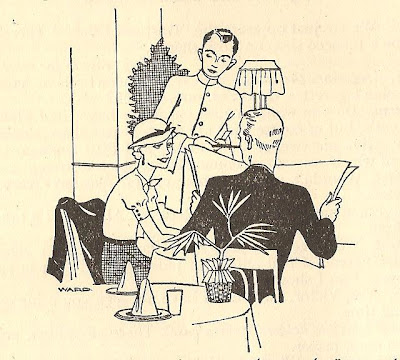 So they're planning their trip for August… mmmm… August 1942*… Russia.  They would be visiting just in time for the beginning of the Siege of Stalingrad.