The Science of Sherlock Holmes by E.J. Wagner.

The Science of Sherlock Holmes: From Baskerville Hall to the Valley of Fear, the Real Forensics Behind the Great Detective's Greatest Cases by E.J. Wagner.  Hardcover book published by John Wiley & Sons 2006. 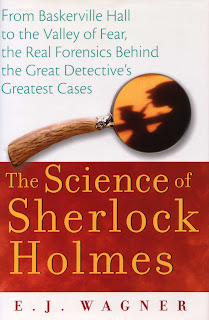 When this book was written and published, the current spate of Sherlock Holmes movies (and TV series) and the subsequent broader popular appeal, were a few years away.  This is not meant to imply that Sherlock’s appeal is only of interest to those who are into the latest blockbuster to hit the big (or small) screen.  Indeed, Sherlock’s popularity has had a longevity which unlike many (but not all) of his contempories didn’t.
So why a book about the science of Sherlock Holmes?  In 2006 one of the most popular television shows in the United States was a little thing called CSI: Crime Scene Investigation.  This little thing was enormous… a ratings winner… a true Jerry Bruckheimer blockbuster.  There were various Emmy and other entertainment awards, a few franchises and then some of the concepts, such as references to DNA testing and other bits and bobs, started to pop up everywhere (the CSI effect is when real people… not the people on the telly… have an unrealistic expectation of what forensics and law enforcement can achieve).  This book was published at a time when interest in forensic science was/is at a high… which I guess is the best time to do this.
“E.J. Wagner demonstrates that without the work of Sherlock Holmes and his contemporaries, the CSI teams would be twiddling their collective thumbs.”
Leslie S. Klinger, Editor The New Annotated Sherlock Holmes.
Sherlock may be a vintage detective, but he was also a clever guy* and he solved crimes in his own clever way despite there being no DNA tests available at the time.  His scientific capabilities enabled him to catch the baddies and that is what this book is all about.  I like a clever detective. I like the process by which a tricky crime is solved particularly in relation to clever forensic detection… and I even like Sherlock Holmes.  More importantly though, will all those CSI fans like it?