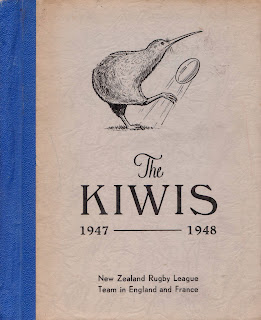 So what do I know about Rugby?
Next to nothing.  I know there’s more than one sort of Rugby and I know that people run very fast and throw a ball… and that sometimes people get hurt.  I’m also aware that off the field some Rugby players have a bad reputation.  More importantly, I do know that people are fanatical about Rugby in all its forms and permutations, not only here in Australia but overseas as well.  Which brings me to this book.
New Zealand is well known in this country for its competitive nature on the Rugby field… and indeed on any playing field where we can possibly compete (Cricket, Soccer… Apples).  In 1947 the New Zealand Rugby team decided it was time to go a little further a field to play some Rugby and decided that Europe was where rugby was really happening at the time.  Which in itself was an interesting choice considering that Europe had just finished one battle (WWII) and I do wonder how prepared they would have been to do battle against New Zealand in 1947.
The book contains a lot of detail about the games that were played.  This was a time before cable TV… or any TV and a book (this book) was the way one got a blow by blow account of the events.  It contains lots of statistics and information that would appeal to anyone interested in the History of Rugby, particularly the New Zealand variety.
So here’s the problem.  New Zealand is not really that far from where I sit now… a bit far to walk or to run holding a ball, but on a plane it’s fairly close.  So if it is that close why don’t I sell more books to New Zealand?  Well the secret lies in that competitive nature I mentioned above.  New Zealand buyers tend to shop within New Zealand (correct me if I’m wrong).  They have their own version of eBay called trademe which is incredibly popular… just ask someone living in New Zealand if they would rather shop on trademe or eBay.  Unfortunately trademe is only available for New Zealanders or at least for people with New Zealand bank accounts.  They have eBay as well, but from the information I have, trademe is a serious competitor.
So the long and the short of it is that my experience of sales to New Zealand is minimal… that doesn’t mean that I haven’t sold books to New Zealand, it means that the number of books I sell to New Zealand is minimal considering the lower cost of postage to NZ as apposed to elsewhere.  This lack of interest from Australia’s neighbor, makes it hard to sell books about New Zealand rugby in 1947.
So here’s the deal… I will buy a New Zealand apple when someone in New Zealand buys this book... and not before.
Posted by robin at 12:42 AM