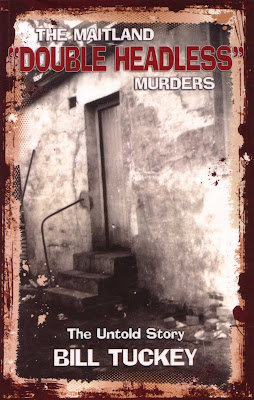 This is the sort of title that stands out in the same way that “Principles of Inorganic Chemistry” doesn’t. I had never heard of the “Double Headless Murders” until I found this book, this may be a geographical issue (Maitland is just out of Newcastle in N.S.W. and I’m from Melbourne in Victoria) or it could be the passing of history (the murders took place before I was born)… or maybe it’s due to my lack of interest, not so much in Headless bodies, but in true crime.
The title is a good indicator as to the content.  I didn’t even have to read the blurb to have a fair idea that there were 2 bodies and they were both lacking heads and it all took place in Maitland.  So I won’t go into the details… lets just say that it was pretty horrible… and in case you’re wondering, there are no photographs of the bodies… or the heads.  True Crime books are a strange thing.  In this case, history and crime combined to excite a morbid fascination.  True Crime fans out there may disagree with the words “morbid fascination” and “excite”… all right, I’m an outsider looking in on the subject and I don’t get it… yet I am also willing to admit that I did check to see if there were any pictures of the bodies (morbid fascination?).  Not sure why… but I did.  For some reason I think most of us would… oh boy, I feel this blog entry getting weighed down with deeper psychological inquiries into the meaning of True Crime books, so I’m going to take a step sideways and write about some friends of mine.
There is a secondhand bookshop that I know of, that no longer stocks any true crime.  Many years ago they had a small true crime section but decided that after too many strange people wanting to come in and talk about these books at great length… sometimes with a little too much detail and for an uncomfortable amount of time… that for their own safety they would no longer stock these books.  So the upside for me, is that I don’t have this problem.  The anonymity and lack of personal contact of the www lets me sell this book without a discussion on how the heads were cut off, bodies disposed of and how some super sleuth caught the “perp”.  Kept at a distance, I’m happy to service their needs… and have a quick look at the pictures.
Posted by robin at 12:09 PM