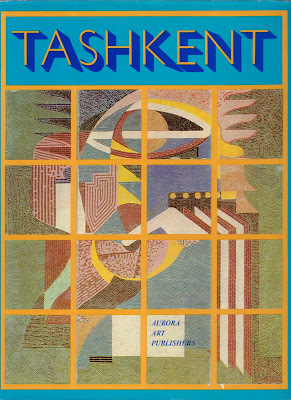 “Tashkent, the capital of the Uzbek SSR, is one of the most ancient cities of Central Asia. It was a major cultural, economic and political centre as far back as the fourteenth—fifteenth centuries. During the years of Soviet power it grew into an important industrial centre in which large-scale housing and public construction was initiated, new parks and gardens were laid out and numerous pools and water-reservoirs created. In 1966 a violent earthquake interrupted the systematic development of the Uzbek capital. Many buildings were damaged or totally destroyed. In the reconstruction of the city which began almost at once architects and builders from all the republics of the Soviet Union played an active part. Never before in the world had construction on such a grand scale been effected in so short a time. It took only a thousand days for the new building complexes of Tashkent to be put up. Today the ancient metropolis is a city grown younger, a city reborn. The authors of the album focus their attention on the architecture of the new housing complexes and the unique public buildings erected in the late 1960s and early 1970s. It is an architecture in which modern construction methods go hand in hand with the national artistic tradition.”
Firstly a small confession of a guilty pleasure.  I collect what I refer to as “Communist Propaganda Books”  (See my other blog: http://smilingfacessometimesbutonlysometimes.blogspot.com/ ).  The criteria is fairly broad, any books that are used to directly or indirectly promote a communist country/government, generally up to the fall of the Berlin Wall.  Tashkent, a book which I have in my personal collection, is a truly beautiful example and one of my favourites.  The publisher was Aurora Art Publishers, Leningrad and the year was 1977.  The book looks at the architecture of Tashkent with the emphasis on the rebuilt architecture post their 1966 earthquake.  It is amazing.  Soviet architecture at times combined with Central Asian architecture… 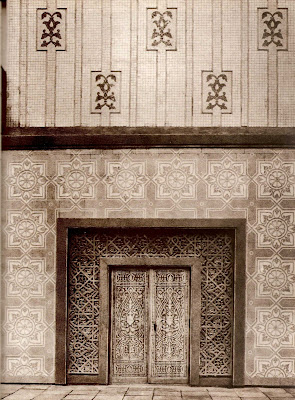 I guess these images are a bit like those Boring Postcard books. 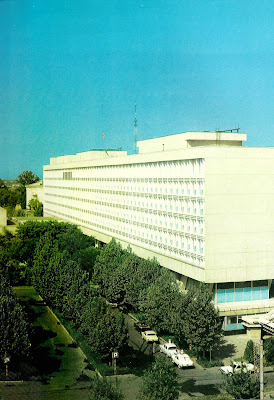 …and these wonderful restaurant photographs 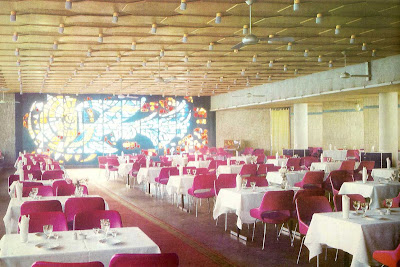 This is a copy I recently found to sell and will be listing on ebay (could I really be that lucky).   Ages ago I was talking to a well known Melbourne bookseller about these sort of books and he informed me that they are becoming rare… this information may or may not be true (booksellers…can you trust them?).  I know of at least one collector ….ME, and there are bound to be more of us out there (?).  A few years back I found a spare copy of “Karst in China” another amazing propaganda title, combining geology and communism (surprisingly easy).  I listed it on ebay and it sold for a nice price.  Maybe it was someone interested in Karst, although I’d like to think I’m not alone.
...and finally
Many years ago I briefly visited Tashkent.  The Aeroflot flight was from Delhi to London, stopping in Tashkent and Moscow on the way.  We landed, were herded onto the Tarmac by machine gun carrying soldiers and were watched as we watched rather large women supervising the loading of food onto the plane.  They then bussed us into the terminal (soldiers still present) and into a guarded room.  Very kindly they gave us some disgusting lemonade and some stale sandwiches.  After about an hour they bussed us back to the plane and we left.  Seeing this book makes me realize how much I missed out on.
Posted by robin at 2:23 AM