The Cobb Book by Ron Cobb. 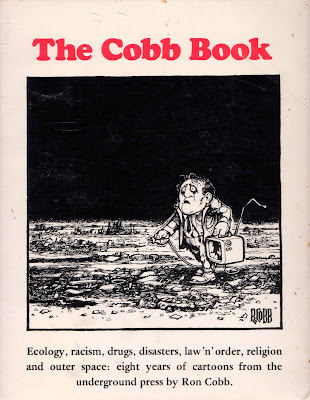 Way back in the 1970s, when I was young, foolish and impressionable… and in high school, I discovered a well thumbed copy of “The Cobb Book” (paperback) in the school library.  Ron Cobb was/is an American cartoonist and this book was a compilation of eight years work mainly published in the Los Angeles Free Press after 1966 and up to this collection being published (1975).  I remember being obsessed with the images, I don’t remember them making me laugh, if anything they made me a little sad…. they still do.  It’s a grim world that Ron Cobb shows us, without much hope, full of environmental disaster, war, race issues, religion, drugs, etc. just the sort of thing a teenage boy growing up in the suburbs of Melbourne in the 1970s needed.  So what were the librarians thinking when they decided to put this fine tome into the collection?  My education was all the more rounded due to it, I learnt things from it….maybe not what they wanted me to learn…maybe that was the point…but you know looking in particular at the drug topics covered, I don’t think anyone thought too hard about how suitable this book would be.  Maybe time has changed our view on this sort of content and I’m now looking at it with 2010 glasses on.  I do know that this book influenced me as a teenager, despite the darkness.  I recently found a copy and snapped it up with a fond nostalgia and flicking through it now over 30 years later, I know these images have remained back there deep in my psyche probably as scar tissue. 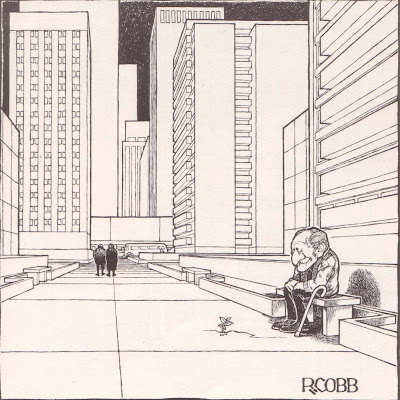 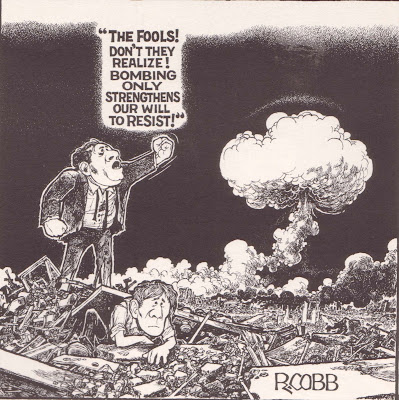 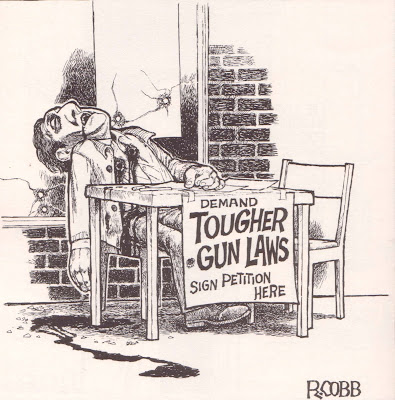 As a bookseller I obviously buy books to resell, which is why I bought this book.  There are a number of important things about selling a secondhand book, particularly on line, and most of them are the condition the book is in.  Over the years I have found a few other copies of this book and what I have written above has gone through my head each time.  But all the other copies of this book that I have found have started to fall apart due to age, or like my high school copy have been a little too “thumbed”, or a combination of the two.  I was so pleased to find this copy, nice tight binding, minimal wear to the cover, and no loose pages… until…  When I write up a book to sell on line, I copy either the publishers blurb or the introduction and include it with the listing, that way the buyer gets a better idea of what they are purchasing.  So I gently open the book to copy the introduction and…. you guessed it, the binding cracked and the pages start falling out.  Today I copied the images that are with this listing and every page I opened fell out.  Like the contents this made me a little sad… but maybe that’s the point. 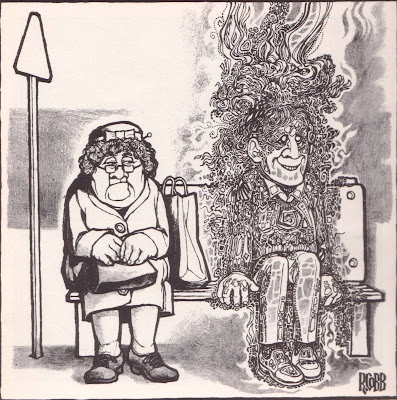 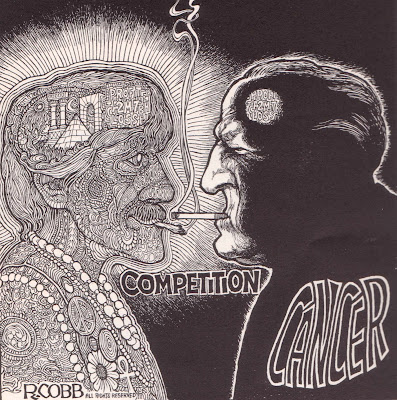 Ron Cobb is one those people who keep popping up here and there.  Most recently I saw him on a DVD of extras of the first “Alien” film directed by Ridley Scott (by the way the extra disc on this DVD is awesome, I rarely watch these things through as they can be quite dull, this one is very long and is jaw droppingly good.).  Some of you probably know this already but Cobb did some of the design and artwork for this excellent film, not the Alien stuff but the Nostromo, which also just happens to be one of my favourite literary references.
Posted by robin at 1:03 AM