The Partridge Family Annual 1974 featuring David Cassidy.  Authorised edition based on the popular Television Series.
The Partridge family.  They made us “get happy”, they showed us a “whole lotta lovin’” … and “singin” and you “get a happy feelin'” when they’re singin.  This book was published in 1973, the year before the Partridge Family TV show was axed.  I do remember watching the Partridge Family and liking the show….not “lovin’” it, just likin’ it.  I remember very clearly that I didn’t like the songs (hard to believe, I know).  In hindsight, this doesn’t make much sense.  Wasn’t the purpose of the show to cross promote the 10 Partridge albums that came out at the time, or was it the other way around?  For some reason it didn’t work on me.  Not once did I pester my parents for a Partridge Family album, book or any other merchandise (lunchboxes?).  I was happy to turn on the telly, watch the show and then turn off.  I didn’t need and still don’t need to see, hear, or look at the Partridge Family other than that half hour after school… but after all this time, and rather inexplicably, I still remember the show despite my lack of interest in the music and in this instance my personal lack of nostalgia for it.  After 35 years there are people out there who DO feel nostalgic, who didn’t get the annual and would rather like to be reminded of another time when David Cassidy was a star (is a star?) and Danny was relatively on the straight and narrow. 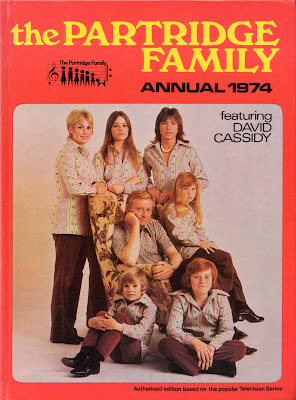 Anyway, this book has no photographs of the family other than what is on the cover.  Which sort of makes you wonder how much they had to do with it… probably nothing… which I guess isn’t unusual.  The book is illustrated and there are illustrations of the family, there are also some photographs… but not of the family.  I wonder if this was a copyright issue or was the book about really about cashing in (photographs may have been more expensive).  And re “cashing in”…10 lp records in 4 years… think about it.  The Partridge Family were very popular and I guess they are still popular in some circles.  This book is perfect for anyone who did pester their parents and wants to revisit* that moment in time.
*The Partidge Family…not the pestering.
Posted by robin at 2:54 AM