That Ragged Mob: The Service Record of the 3rd and 4th Victorian Bushmen Contingents in the Boer War with a brief biographical sketch of each man who served by Robin Droogleever.

That Ragged Mob: The Service Record of the 3rd and 4th Victorian Bushmen Contingents in the Boer War with a brief biographical sketch of each man who served by Robin Droogleever. Hardcover book (no publisher listed, probably self published) 2009, 705 pages with black and white photographs and maps. SIGNED COPY. 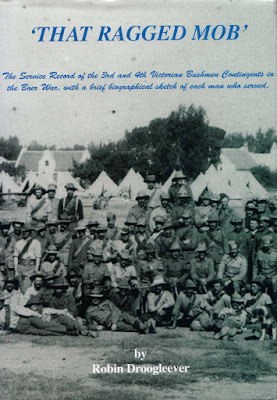 In February 1900 the raising of the Bushmen Contingents in Australia was met with a mixture of cynicism and optimism. It was thought that men without militia training would be a disaster on the battlefield. They might even shoot each other! The optimism lay in the faith many had in the character of the Australian bushman — his riding skills, self-sufficiency, adaptability to extremes of climate and living conditions, his courage and his pride. As it turned out the optimists were right. Soon the Imperial authorities were calling for more Bushmen to be enlisted. ‘That Ragged Mob’ follows the Victorian 3rd and 4th Contingents sent to the war in South Africa. It tracks their recruitment, organisation and exploits. It looks at their courage, principles, humour and weaknesses. These are the men who fought at major battles such as Elands River Post, Koster River, Hartebeestfontein, Rhenoster Kop, Wolvekuilen and a host of minor skirmishes, enhancing their and Australia’s reputation. The story relies upon the words of the men who were there. They were a literate lot and wrote many letters home which the local press published uncensored. When they came home they were welcomed as heroes. Many were to ‘give it another go’ in the Great War of 1914-18. In the campaign they rode into battle with Western Australians, New South Welshmen, Queenslanders, South Australians, New Zealanders and Imperial Yeomanry.

If you have a look at a map you'll see that Australia isn't really that far from South Africa. …. OK, it's a bit far to swim there and there are a lot of sharks between here and there, but Australia is still just that little bit closer to Cape Town than Old Blighty is and i'm sure that when the Boer War kicked off, this was in the minds of the powers that be when it was decided that Australia should send some of it's own over there to show that we were part of the greater whole. Excluding Tasmania, Victoria was as far as you could get from South Africa and i'm fairly certain that most of the people from here who went and fought, didn't really have any idea of what they were heading towards other than a vague cliched concept of African tribesman and lions*.

Like all wars, The Boer War was a nasty affair. The Boers were nasty. The British and their allies were nasty. In case you didn't know, this was the war that helped develop the Concentration Camp. The British also practiced a Scorched Earth policy and if you read enough about the war** you get the feeling that they were desperate (hence Scorched Earth and Concentration Camps) and that the Boers were tough and confident.

People here don't commemorate the Boer War... at least not in the same way they do with WWI and WWII and that's why I think this book is particularly interesting in that it fills a gap in our military and general history. There are of course other books about Australians in the Boer war and there is the Breaker Morant episode that has been written about and filmed, but for most of us everything else is a little vague, particularly if you compare it to the war that began 14 years later. This book fills a very specific gap in the history of us and that war in South Africa.


* The Boer War by Thomas Pakenham is a good place to start... and then you can read this book.
Posted by robin at 12:39 AM