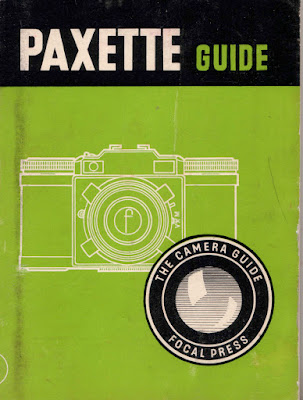 This book is a guide to the Paxette and Super Paxette Cameras. The Paxette belongs to the small group of early post-war cameras which, through their original design (breaking away from many pre-war traditions), helped to create a new look and new trend in modern photography. At the same time they paved the way for numerous latecomers in the field of the inexpensive 35mm camera. The Paxette has no bellows, the lens being fitted rigidly to the camera front, thus doing away with opening up of the camera. It is fitted with a film transport coupled with the shutter tensioning and exposure counter. The viewfinder is an integral part built into the camera body.

Cameras have changed a bit since 1957. Most often they are now called “mobile phones” or “mobile devices”. Don't let the “phones” in the first one confuse you, it's a camera and sometimes a phone. You can still buy a camera, but I think I can confidently and arrogantly assert that more photos are taken on mobiles than on Cameras. Correct me if i'm wrong.


Despite the changing world of picture taking, there are those that persist with the camera and there are even those who appreciate the vintage camera. I know of at least 3 people who own and regularly use a real camera, 2 of these I would even catagorise as collectors of vintage cameras. It was with this knowledge of appreciators that saw me pick up this guide/manual for the Paxette. I had no idea what a Paxette was at the time, but fortunately due to the picture on the cover and the format of the book (small booklet size bordering on ephemera), I figured out that it was a camera and that this book had something to do with it. I guess it's all part of the learning curve that this bookseller is still curving through.
Posted by robin at 12:43 AM