Born In A Tent: How Camping Makes Us Australian by Bill Garner.

Born In A Tent: How Camping Makes Us Australian by Bill Garner. Paperback book published by University Of New South Wales Press 2013, 288 pages with black and white photographs and illustrations as well as some colour illustrations and a few colour photographs. 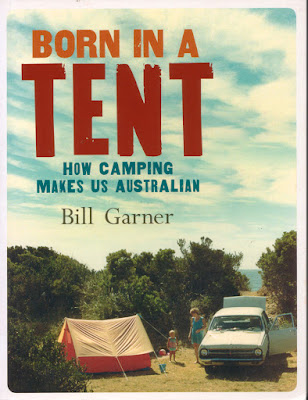 “Breathtakingly original, this book shows that the history of Australia can be told through a history of camping. Bill Garner reminds us that Australia was settled as a campsite — the nation was born in a tent. But while Europeans brought tents, they did not bring camping. Australia had been a camping place for millennia. And so it continued to be. For more than a hundred years, settlers — women as well as men — colonised the country by living under canvas. It changed them into a new sort of native Australian. It gave them a feel for the place, a wry can-do attitude, and a lasting taste for equality and it led to a sense of belonging.”

My family emigrated to Australia in the 1950s, which was a few years before I sprung into this world. It was post war (the second big one) and there was this thing known as assisted passage meaning that the Australian Government would pay you to come by boat and set up shop here in Australia... which is as far way from current Australian policies on immigration as you can get. It was that whole thing of better opportunities here, compared to post war Europe over there.

The story goes that my parents weren't 100% sure what would happen when they got here. I think there was a thought that they (my parents and 2 brothers who were both toddlers at the time) would be left standing on a pier with suitcases and a trunk... without any friends, absolutely no grasp of English and no where to stay. So my father hit upon the idea to pack a tent at the top of the trunk. They were coming by boat and he figured that they would be on or near a beach and they could set up a tent as temporary accommodation. In the end this was not necessary as Australian officials took care of them.


The reason I mention this is of course related to the whole tent/camping thing that this book, Born in a Tent, is all about. For my family it was a real option to live under canvas as many people had done before. They were part of the European colonisation of Australia, not necessarily early colonisation, but colonise they did. The book doesn't look at post war immigrants camped on the shores of Port Phillip Bay but does cover a large swathe of Australian history. I'd like to think that my parents “wry can-do attitude” re camping upon arrival was the beginning of their Australianisation and in a way they were part of the history of Australian camping... even though they didn't do it. It was an idea and in retrospect, it was an Aussie idea... at least i'd like to think so.
Posted by robin at 12:13 AM