The Light on the Hill: The Australian Labor Party 1891-1991 by Ross McMullin.

The Light on the Hill: The Australian Labor Party 1891-1991 by Ross McMullin.  Hardcover book published by Oxford 1991, 502 pages with some black and white photographs and illustrations. 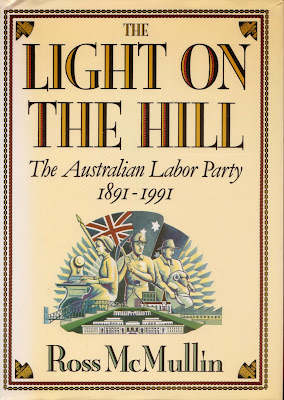 “The Light on the Hill (a quintessential Labor motto made famous by one of its great prime ministers, Ben Chifley) commemorates the centenary of the Australian Labor Party, one of the world’s oldest political formations, which began to assemble in the pre-federation colonies in 1891.”

I think all the lights have gone out… and it looks like we are heading for continued power shortages for an extended period of time.

For those of you who are not here in Australia let me sum up the current state of Australian politics:


1/ We are heading towards an election


3/ The previous leader of The Australian Labor Party, and former Prime Minister, is hanging around claiming he is: not in the shadows, not hanging around and doesn’t want his old job back even though he is more popular (according to the public) than the current leader


4/ The opposition are hovering around waiting for the last gasp whilst they and elements of the media, peck mercilessly at the Prime Minister

This book is not about anything remotely related to the current political situation… except that is about the Labor Party who have a long and varied history.  I guess all politicians and political parties have long and varied histories and some have longer and more varied histories than others.  In this current political climate this book should be of interest to anyone remotely interested in the Labor Party… which is not that many people… and getting fewer in number every day.  It would be interesting to see a history of the second hundred years and how this current circus will be remembered.

Can someone please turn the light back on.
Posted by robin at 4:25 PM