Great Ugly River by Mike and Mal Leyland.  Hardcover book published by Lansdowne 1965, 226 pages with some black and white photographs. 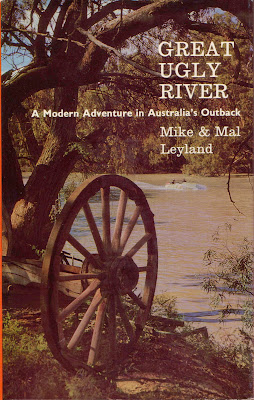 I wrote about the Leyland’s a few years back whilst discussing “Laraine Leyland’s Food for the road”, which is a great cookbook for those wanting to learn those “camping and caravanning cooking secrets which she made famous on television”.  My copy of Loraine’s meisterwerk did manage to sell and I haven’t found another copy since then (2010).  Recently, whilst on my own expedition, I did manage to find this book, in which Laraine doesn’t appear at all.  I have wondered what the men ate without Laraine’s talents on the fire and camping stove… Cheese on toast? Baked beans?


So this book has nothing to do with cooking but has everything to do with adventuring in the Australian outback.  The Leyland brothers and a mate of theirs, “set out in an open boat to conquer the 1400 miles of Darling River from Queensland to Victoria.  The journey had never been made before and, judging by the experiences of the authors, it is unlikely to be attempted again.”  For some reason, I think I’ve seen the film of this expedition which was entitled “Down the Darling”.  I used to watch all of their docos on the telly, I loved it.  I was 5.  Specifics, I can’t remember, but a general sense of adventure into a barely known landscape, I do remember.  I was enthralled.  These days the Leyland’s would be dropped from a helicopter onto an ant hill with a spoon and packet of biscuits… and then they would probably be voted off their own TV show by Kyle Sandilands.  They don’t make adventure documentaries like they once did.

This book was obviously meant as a tie in to the documentary… or was it the other way around?  These days the book would be released at the same as it’s TV screening and we all know it’s rare that a TV tie book has a lasting appeal.  There are of course exceptions to my previous statement and I believe the Leyland Brothers are one of those exceptions where the book can be popular 40+ years after the fact.  I like the Leyland’s which is one of the reasons I’m writing about it here.  I also figure that if I have some nostalgia, then others will as well, making this book just that little bit more saleable.  If Laraine’s book can sell, so can Mike and Mal’s.
Posted by robin at 3:00 AM