This Is Your Country on Drugs by Ryan Grim. Bound and Gagged by Alan Travis.

This Is Your Country on Drugs: The Secret History of Getting High in America by Ryan Grim.  Hardcover book published by John Wiley & Sons 2009.
Bound and Gagged: A Secret History of Obscenity in Britain by Alan Travis.  Hardcover book published by Profile Books 2000.
Do you want to know a secret?... or a few secrets.  Here are two books that contain secrets.  Secrets which I guess are no longer secrets as they have been published and now the whole world knows all about them… although I’d never heard of either of these “secret” books until I found them.  They must be very secret.
“This Is Your Country on Drugs” is a history of drug use in the United States.  The United States doesn’t have a monopoly on drug use but they seem to do a lot of it... or is just that our U.S. dominated media and entertainment injects this stereotype into our Australian lives?  We also have drugs here in Australia and yes people do use them. This book isn’t about Australia though, it’s about the United States which according to the publishers blurb, “use drugs at a far higher rate than any other people in the world”, so I guess that’s a good reason for a book like this to exist… 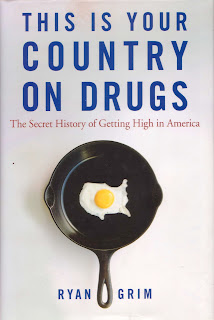 I like the cover photo.  Very clever.
Anyone with a passing interest in drug usage whether as an observer or partaker, may find this book of interest.  It’s full of various chapters concerning various drugs and the use thereof including Cocaine, Crack, Marijuana, LSD and others.  Apparently the disappearance of LSD in the U.S. in the early 2000s, is due to one drug bust in Kansas.  After that it was all over… until the next time.  The story of this world changing event (or rather U.S. changing event)… which was possibly secret… is no longer secret, because it’s contained in this book.  So I guess if you need a hit of U.S. drug history, particularly the secret bits, this is the book for you. 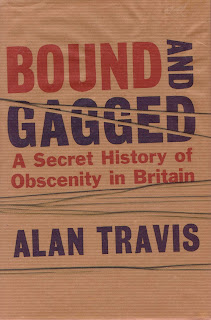 A book wrapped in brown paper once meant something of interest was inside.  At the least, it meant that you and I weren’t meant to read it.  The publishers of “Bound and Gagged: A Secret History of Obscenity in Britain” have chosen to replicate this effect, to great effect.  I like it.
There was a time when everything of interest, was considered Obscene… or so it would seem.  Chapter two of this book looks at James Joyce’s Ulysses.  Now I’ve read Ulysses, but it was a long time ago and for some reason I am unable to remember any offensive bits from within the maelstrom.  Maybe this says something about me or maybe it goes to show that there are more important things in the book than a few bits that could possibly shock my mum… that is, if she were ever to read it… which I doubt she will.  Apparently there are references to nipple sucking and female orgasm… lets face it, Great Britain in the early twentieth century wouldn’t want anyone to read about these sort of things… and neither would my mum.  There were also a few expletives in the text and the powers that were, decided that the language of the people, along with the Nipple thing and the Orgasm as well as some other juicy bits, means that this book should not be in print.  These details and many more are contained within this book… it’s good to have these bits and pieces pointed out particularly if you missed them the first time around as I did.
Do you think the book would have a chapter on D.H. Lawrence? Of course it does.  Obscenity wouldn’t be obscenity with Lady Chatterley (which I haven’t read).  I think I do need to mention though that both Ulysses and Lady Chatterley’s problems with the censors, weren’t really that secret.  The finer details of these cases, I guess were a little bit secret… particularly for me who didn’t notice the bits in Ulysses that I should have noticed.
Posted by robin at 2:51 AM