Brighter French: For Bright Young People who already know some by H.T.R. 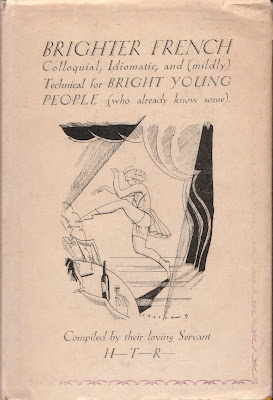 Once again the dust jacket rules supreme.  If this book hadn’t of had the dust jacket it has, I don’t think I would have picked it up.  The front image is so good they used it on the back and in the book as well.  There’s a few other pictures, all of great interest and quality.  Your probably wondering as I am what do these images have to do with the text.  My guess is that they were used to sell the book, which they have managed to do… in this instance, once again after 85 years. 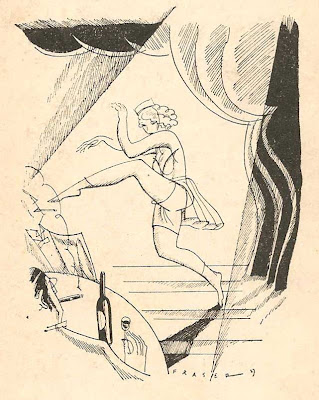 Have you ever wondered what “Il a une facheuse tendance a se pocharder”* means?  Or how do you say “Three hundred trains pass here everday”** both of these are statements that we all want to say in French as often as possible.  Well maybe not so much now in 2012 but obviously the trainspotting youngsters of 1927 who were keen on a drink or two, needed this information.  The front of the dust jacket sort of sums up the content and the intent, very nicely as indeed it does contain “Brighter Colloquil, Idiomatic and (mildly) Technical” French “for Bright Young People (who already know some).”  H.T.R. wrote this book to combat all those boring language books that discuss the gardener and the gardener’s wife and looks at more pressing topics like “She was nervously nibbling her cigarette holder”*** and “He has already been in prison (on remand) six months, awaiting trial.”**** 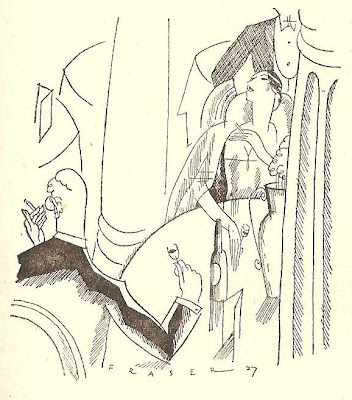 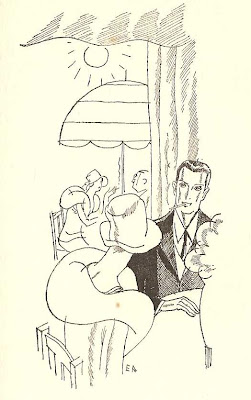 All of this makes me think that if only i had this book when I was learning French at school, maybe some of it might have sunk in.  The truth is, J’avoue que je ne suis pas extremement chaud.
* He has an annoying propensity for getting tight.
**Il passe trois cents trains ici par jour.
*** Elle mordillait nerveusement son fume-cigarette.
**** (You don’t really need to know how to say this in French... do you?)
Posted by robin at 2:31 AM