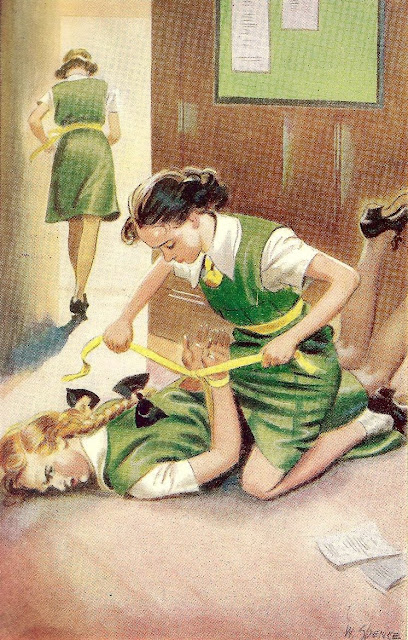 More luridness?… or is this something a little more innocent than my last blog entry?  The caption reads: “She trussed her victim very effectively”.  Is it just me, or does this look suspiciously like a vintage bondage illustration… (not that I’m overly familiar with that particular genre of illustration…?).  Look at it… there’s young girls in school uniforms and one of them is getting “trussed”… she has pigtails as well (?). The illustration references page 115 and here is some of the text from that page:
“She would give this dreadful little spitfire her head and see just how far she dared to go. So that was why Melody was somewhat surprised at the very weak resistance Ella pretended to put up when she proceeded to tie her hands together with the tunic girdle. Never for a moment did she suspect that a trick was now being played on her. She trussed her victim very effectively, hands and feet, and then put the finishing touches to her efforts by tying her pigtails in a knot.”
No, this book was not written by the Marquis de Sade.  This book is the work of Judith Carr, an alias of Mrs. E.L. Fairbank, and it was written and published for teenage girls of the 1950s.  It has absolutely nothing to do with bondage… except for this illustration (which is the only illustration in the book)… and possibly that little bit of text that I excerpted.  It was a different time back then and this sort of thing was obviously OK to put into a book written for young girls.  I bet there is no publisher today who would print this sort of illustration (or text) in a childrens book. 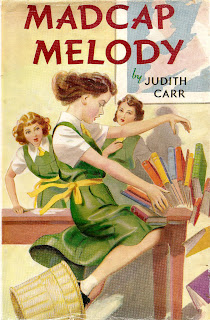 The main reason I’ve written about this book is that the illustration is a great juxtaposition to my last blog entry.  I saw this and immediately thought of the “lurid” Ned Kelly illustration, which to me seemed so silly.  This illustration on the other hand could be easily misunderstood if taken out of context (as i have done)… at least I think it could… Could it?
(In the next few weeks I plan to write about something I recently acquired, that really was and is still is “lurid”… at least I think it was/is.  Stay tuned.)
Posted by robin at 1:19 PM