Victorian Railways: General Appendix To The Book of Rules and Regulations And To The Working Time Table: Effective as from 1953, and until further notice.

Victorian Railways: General Appendix To The Book of Rules and Regulations And To The Working Time Table: Effective as from 1953, and until further notice. Hardcover book (no dust jacket) published by Victorian Railways 1953, 784 pages with a few black and white photographs and illustrations. 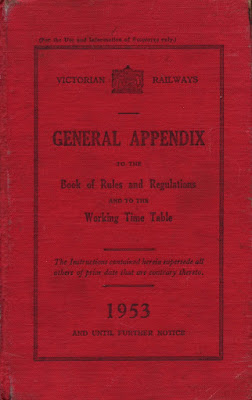 “Every Station-master, Train Controller, Clerk, Operator, Inspector, Roadmaster, Foreman, Driver, Fireman, Equipment Examiner, Train Examiner, Guard, Conductor (Train), Signalman, Signal Supervisor, Signal Fitter, Linesman, Signal Adjuster, Yard Foreman, Shunter, Porter, Ganger, Repairer and Gatekeeper, and every other employee who the Head of the Branch considers should be acquainted with the instructions contained herein, must be supplied by his Superior Officer with, and have with him when on duty, and produce when required, a copy of this Appendix. Every employee supplied with this Book must make himself thoroughly acquainted with, and will be held responsible for compliance with the following Instructions.”

As a bookseller you occasionally get to meet that rarer breed of book buyer/collector. The someone who is REALLY into their books. Usually they will know their subject back to front and then some, and will already have each and every title that you can comfortably throw at them, possibly as first editions not only in English but in Swedish and German as well*. The secret is to be able to delve even deeper within one's hat and pull out that rarer or unheard of volume that will genuinely impress. Needless to say, this can be a more than difficult task.

Railway people, that is, the real deal railway enthusiast, generally fall within this demographic. There are no smiles when you place a lovely Readers Digest Trains of the World in their paws. Nope. They want... ummm... Well, I don't know what they want, as i've never been able to satisfy the fully fledged rail fan. I've had reasonable luck with on line sales of rail books, but in the flesh and after showing most people what i've got, there's usually a polite thanks but no thanks followed with a slightly sarcastic smirk at the end. I just can't find what these people want and to be honest, I don't know if most of them know what they want. 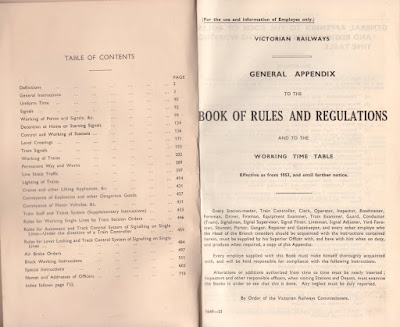 The “Victorian Railways: General Appendix for 1953” was one of those books where I should have known that a bonifide train man (i've never met a train woman), would already have it. It's sort of obvious if you think about how many of these books were published being that every Station-master etc had one and I imagine that means there were and are still a lot of copies floating around... and this means that it's not that rare a volume. Here in Victoria if you start alluding to this book with a vague description most people in the know that i've met ,are more than familiar with it. They all love it and they all have it.... and then comes the slightly sarcastic smirk.

I guess the secret is to find the new comer to Rail enthusiasm, that is the novice who is keen to pick up the classics, the someone who wants to know about train shunting in 1953... and not the guy who came and saw me a few weeks ago... another smirker