Life under the Bells: A History of the Metropolitan Fire Brigade, Melbourne 1891-1991 by Sally Wilde.

Life under the Bells: A History of the Metropolitan Fire Brigade, Melbourne 1891-1991 by Sally Wilde. Hardcover book published by Longmans Cheshire1991, 265 pages with monotone photographs, a few monotone illustrations and some colour photographs. 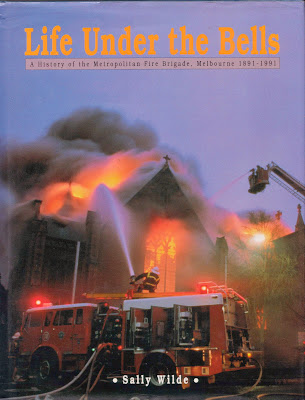 Under the Bells celebrates the centenary of the Metropolitan Fire Brigade, Melbourne. In this book Sally Wilde describes something of the comedy and tragedy of the everyday life of generations of firefighters. Compiled from dozens of personal interviews and a wealth of documentary evidence, the book traces the evolution of attitudes, equipment, living conditions, firefighting and fires themselves, over the last hundred years. A fine collection of photographs, many from the nineteenth century, illustrates the text.

Firefighting is something that I have never had much to do with other than to notice when a firetruck has sirened by and to have a distant appreciation for the outstanding work that firefighters do. I consider myself fortunate in this matter as, having spoken to a few people who have had close encounters with firefighting and firefighters (i.e. their houses have burnt down), it's not a pleasant thing to have to go through... particularly if you are a bookseller.

This book is a look at the history of Melbourne through its fire brigade. If you think about it, 1891 is quite late for the establishment of a fire brigade in what was then a thriving, throbbing, metropolis. Before 1891 you had to depend on volunteer fire brigades to come and put your fire out, which is what the rest of Victoria currently has as far as fire fighting goes. I guess the powers that be decided that Melbourne was big enough and rich enough in 1891 to employ full time firemen and that it was no longer appropriate to expect volunteer neighbours to help with fire fighting activities.


A book like this has a few things going for it. First of all there's the firefighting thing. There are people out there who are into the whole fireman/fire engine thing and from what I know there are those within that fraternity that will venture into the book buying area of that interest. This book is certainly detailed enough for those wanting information on who, what, when or where the Metropolitan Fire Brigade did what they did. Then there's the history of Melbourne... which is interesting for those interested in the history of Melbourne and it's fire brigade... and who isn't.
Posted by robin at 12:04 AM