MI6: The History of the Secret Intelligence Service 1909-1949 by Keith Jeffery.

MI6: The History of the Secret Intelligence Service 1909-1949 by Keith Jeffery.  Hardcover book published by Bloomsbury 2010, 810 pages with some black and white photographs. 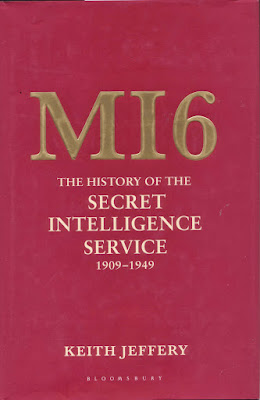 A daunting brick of a book (810 pages), “MI6: The History of the Secret Intelligence Service 1909-1949” is never the less an enticing history of one of the worlds top intelligence organizations.  It’s actually not a full history as it ends in 1949 which is not when intelligence ended (some of you may dispute this), but rather the point where all of the previous history is so old that it doesn’t matter who now knows what went on where and with whom.  The stuff after 1949 is still considered a little touchy, so the author didn’t/couldn’t (?) write about it.

Bond fans* will be pleased to know that both of the Flemings get a mention in the index… which is of course the first thing that I checked when I picked up the book.  Ian, Peters brother, is probably the writer who created and maintained some of the most enduring interest in spies and spying when he catapaulted James Bond upon the world and I’m fairly sure that it is readers of Bond and his ilk who will be interested in a book such as this.  Personally I’m more of a fan of the Bond films but I also have an interest in many of the other spy and spying films and TV shows that abound, of which none, or very few, ever touch upon the time period that this book covers.  Despite my preferences, an intelligence gathering read of early MI6 history does appeal to my sense of intrigue.