Paddle Boats of the Murray Darling River System by Brian Marshall.  Hardcover book published by Mercury 1988, 207 pages with black and white photographs throughout as well as a few black and white illustrations. 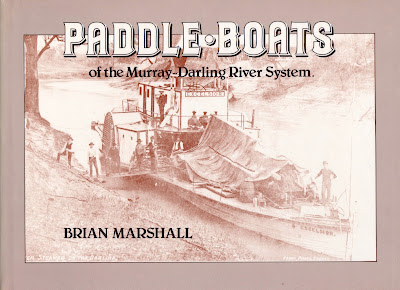 The Murray River is Australia’s longest river… sort of like an Australian Amazon, except shorter and there are no Piranhas.  This river connects with a few others and drains a fairly large chunk of Australia, hence the River System part in the title of this book.  When Australia’s inland was being opened up for exploitation by Europeans in the 1800s, the Murray Darling was seen as a great benefit not only for irrigation, but as a transport conduit as well.
There is the whole drought issue here in Australia and at times this lack of water has caused problems for the rivers.  I’m fairly certain that in our most recent drought, parts of this system stopped flowing completely, which if you’re a paddle boat is a bit of an issue.  Now there’s quite a bit of discussion about the health of the river and the buying back of water allocations which has become extremely politicised… all of which is only slightly related to this particular book, but I thought I’d mention it anyway for those readers not aware of all of this (particularly those not here in Australia).
This book looks at both earlier paddlers and also at the more recent additions to the flotilla that traveled (travel) this inland river highway.  From memory the reason Paddle Boats were used (and still are used) on the Murray Darling had something to do with the lack of water depth.  I seem to also remember that unlike the Paddle Steamers of the Mississippi, ours were usually smaller and were usually, but not always, used for commercial purposes, with the more recent additions generally used for pleasure.  The book has an amazing collection of photographs and illustrations with a large selection of post Second World War snaps.  It seems to be fairly comprehensive and to be written by someone who is passionate about the topic. 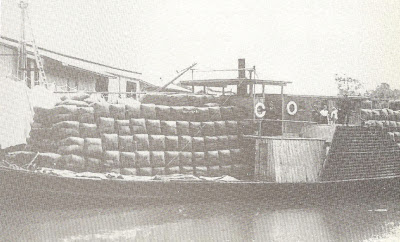 I’ve had a few books on the Murray River Paddle Boats in the past and from experience there is a certain amount of interest in this subject.  This particular title is not that common and i was only able to find one other copy for sale at this point in time (September 2012).  This can only be a good thing as with so few copies currently available for sale, mine should have a higher probability of selling… at least I’d like to think it has.
Posted by robin at 6:22 AM