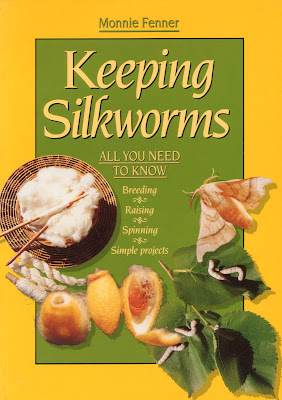 This is the one and only book I have ever found on the fascinating pastime/hobby of Keeping Silkworms.  I haven’t really been looking for books on the subject, but this one sort of jumps out at you when you see it, as it is an unusual subject matter.  At least I thought it was unusual until I casually mentioned it to my mother who informed me that during the Second World War this pastime was actively encouraged and pursued by children in Germany of which she was one thereof.
Cynicism is of course easy with a comment like this… you know what I mean.  The Nazi’s obviously needed silk, probably for parachutes and other things for their nasty war and decided what better way to get it than to get children to actively grow and harvest silk worms… and they can do their school projects on them as well.
So that’s the darker side of this fascinating hobby.  People were breeding (etc) Silk Worms long before Adolf and it’s good to see that people are still continuing the activity without some guy yelling and gesticulating at them.
Posted by robin at 12:50 PM