The Inventor’s Handbook of Patent Law and Practice by Francis Ernest Bradley and Frederic Hungerford Bowman. 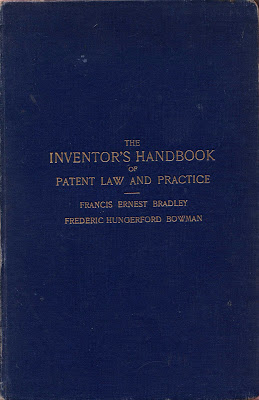 I personally haven’t invented anything recently, so I don’t really have a use for a title such as this.  Indeed, I doubt very much whether the good people at Apple Inc. have much use for a title like this one, although their lawyers would probably have a good giggle at some of the stuff in this vintage guide to Patent Law.
“PREFACE: It is hoped that this Handbook may be found useful not only by inventors but also by solicitors and patent agents. Its object is to present in a small compass a comprehensive summary of PATENT LAW AND PRACTICE.  The book does not consist of a mere digest of the Acts and Rules, or of excerpts from decisions of the Courts. It is an attempt to deal scientifically, but without excess of technicality, with the considerations that influence the Comptroller in making or refusing a grant and the principles by which the Court is guided in its decisions as to the validity of a patent.”
A book like this, is another one of those problem books that I find irresistible.  It’s a problem because I see a book such as this one and I think about how great it is (?) and then immediately think that no one would be interested in it.  So then I stand there going back and forth between the two thoughts (in this particular instance I even put the book down… and then quickly picked it up again) and then figure that if I’m debating about it this much, then I should just get it.  Now, with the distance of distance (and time), I realize that possibly my choice was a little ill advised as somehow, without being an expert on the subject matter, I think that maybe Patent Laws have changed a little in the last hundred years.  Still it’s a nice book and you never know someone at Samsung may want a giggle as well.