The Fry Chronicles: An Autobiography by Stephen Fry.

The Fry Chronicles: An Autobiography by Stephen Fry.  Hardcover book published by Michael Joseph 2010, 438 pages with colour photographs and a few black and white photographs. 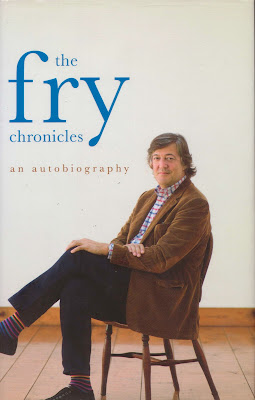 It seems as if Stephen Fry has a small monopoly over our television viewing here is Australia.  If he’s not hosting QI, then he’s travelling around the United States and telling us about it, or popping up in all sorts of other television programs both recent and repeated.  Maybe it’s just me noticing him more often, but somehow I feel that Stephen Fry has become a more than regular face on our telly over the last few years.  This observation even gets mentioned in a recent television advertisement by The Chaser (Australian satirical comedian group) even though he has nothing to do with the show.  Yet despite his overexposure and dominance on the idiot box, I tend to watch most things that he does (…not all of it).  I don’t know why this is other than a vague thought that if Stephen Fry is doing something on the telly, it’s probably going to be interesting… or at least worth a go.  I guess that’s why I picked this book up.  If I think the guy is of interest, then surely others will as well.
Posted by robin at 2:40 AM