Gunners in Borneo: Artillery During Confrontation 1962-1966 by Alan H. Smith. 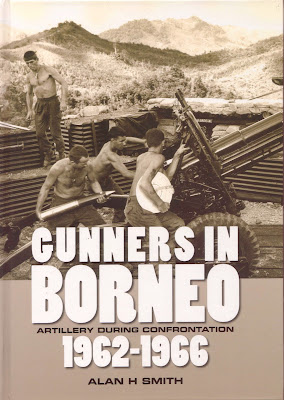 “This is an appreciation of the use of artillery in Borneo during the ‘confrontation’ with Indonesia. It is a little known story.... a war with extraordinary physical and political complexities.... During my services with Australian Force FARELF, the high reputation of our gunners, infantry and sappers in Borneo operations was well known and acknowledged. This work will fill a void in our Army history.” Major General John Whitelaw

Australia has a long tradition of becoming involved in many of the worlds military conflicts.  This book is about a ‘confrontation’ that Australia was involved in with Indonesia.  To be honest, I had absolutely no idea that this ‘confrontation’ had ever taken place until I found this book.  Which I guess is why my inquisitive attention became focused on it.  I like the use of the word ‘confrontation’.  To me it implies that the powers that be were desperate to avoid the ‘w’ word and figured that ‘confrontation’ was a more user friendly term.  From what I can gather this whole thing was kept fairly quiet at the time “Because of the sensitivity of the cross-border operations…” (see link above), in other words, probably because it was all a little bit dodgy.  But don’t trust what I write about this stuff.  What do I know?  Nothing.  That’s why people like Alan H. Smith write books about it and I don’t.  I just sell the book.

Military books are an interesting bunch.  There are so many out there that at times it seems as if everyone who came home from a war (as well as many who never went) either wrote a memoir or a history.  Where this all gets interesting from a booksellers point of view, is that some of these books are worth $$$, and most aren’t, some are very desirable, and most aren’t which means that some I pick up and most I don’t.  There was something about this book that breathed a certain authenticity, which is why my attention was drawn to it.  Firstly it’s a book on a very specific subject that I have never seen before, and even better than that, it’s not a repackaging of the usual images and stories… which in this particular case there are very little… if any… of.  This book is something different to the run of the mill military history.   Self published by somebody who is obviously enthusiastic about the subject matter, is also a good sign and some great recommendations by authoritive people like Major General John Whitelaw is another indicator as to the quality of this book.  This is serious military history for anyone seriously interested in interesting serious military history.
Posted by robin at 3:03 AM