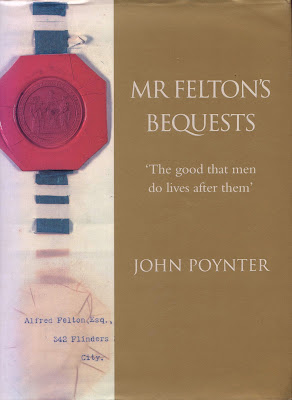 As a young boy (in another words… a number of years ago) my mother would often drag me around the National Gallery of Victoria.  She loved it.  I enjoyed it less so, particularly the being forced to look at all those old paintings that I didn’t really understand and therefore was unable to appreciate at the time.  I do remember looking through the Asian galleries and marveling at all the gold and the sheer foreignness of it all totally amazed and bewildered me at the time.  I think this is where my taste for travelling in Asia began.

Another thing I remember from these visits are the words “Felton Bequest”.   It seemed as if every second piece of art has these words associated with it.  When I write associated, this means that the little plaques that accompanied the works had the words “Felton Bequest” somewhere on them.  From memory I had no idea at all what this actually meant, including the “Bequest” part of it.  I did eventually find out that there was a Mr Felton who left a large of sum of money to the gallery and they had (and still do) bought artworks with it.  Even now as an adult, I find this amazing as Felton left his Bequest in 1904 and between 1904 and 2004 more than 15,000  items were purchased.  Now, we’re not talking items in a supermarket, this is classy stuff.  The stuff that you would want to go see in a gallery such as the National Gallery of Victoria.  The sort of stuff that you would want to drag your small child around.  It makes you wonder how much money this guy had and how big the bequest was, all of which at a guess is probably answered in this book.  I wonder what would have happened if he hadn’t bequested.  Would we have had a half empty gallery without him?  More importantly in relation to bookselling, this book would not have existed or at least not the same book as exists now.

This is another great example of picking a book due to a slight familiarity with the subject.  I know of no other Felton Bequest other than ‘the’ Felton Bequest and at a guess, there is no other, so when I saw Mr Felton's Bequests, I knew immediately what it was.  It’s all sorts of experiences that ring bells, even childhood memories.  And is it of interest?  Yes.
Posted by robin at 2:12 AM