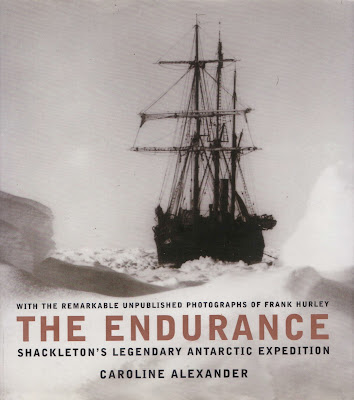 en·dur·ance - noun : the ability to do something difficult for a long time

I wonder if “The Endurance” was deliberately chosen for Shackleton’s expedition because of it’s name.  You can’t really get a name of a ship to be as apt as this by accident, although I guess any sailing ship was a test of “endurance” back in the early 1900s.

Shackleton was no ice novice when he went to the Antarctic in 1914.  He had visited before, most famously as a member of the Discovery Expedition (1901–03).  Unfortunately he was sent home early due to illness.  This is the sort of thing that could bother you a bit and by all accounts it bothered Shackleton.  So he went back, again and again trying to prove a point (?).  This book looks at what is probably his most famous point seeking adventure, The Imperial Trans-Antarctic Expedition (1914–17).  What it is famous for is that the members endured incredible hardship after their ship got stuck in ice and then got crushed leaving Shackleton and his fellow adventurers stranded in what I’m sure you’re aware, is not a very friendly place… unless you’re a penguin… and even then it’s not that friendly.  So there they were, a long way from home, cold and probably hungry.  After quite a bit more cold and hunger, Shackleton was able to get everyone home alive… that is everyone except for the dogs and cat(s?). 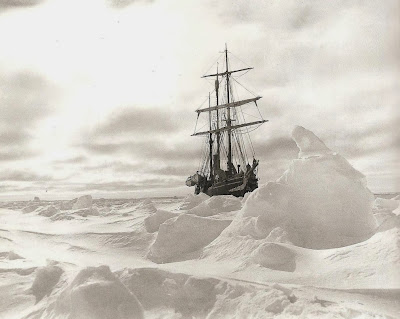 One of the reasons this expedition has endured in our history, is the incredible images that Australian photographer Frank Hurley managed to snap amidst all the enduring difficulties.  To me they are icons of an age gone by, of an adventure that went horribly wrong and then miraculously sort of fixed itself.  I find it amazing that the ship was breaking apart, they were in the middle of a massive ice flow, a long, long, long way from home, cold and probably hungry and Hurley breaks out his camera (a 1914 camera) and takes some photos of the event.  Amazing. 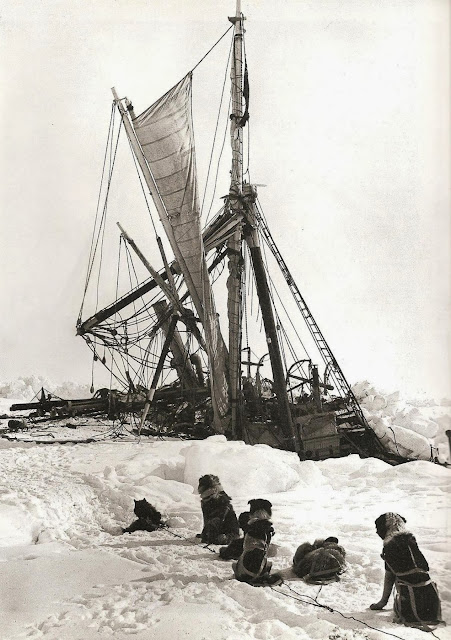 A number of years ago I went and saw an Imax movie about this expedition.  I enjoyed it a lot.  They used original film footage, photographs and contemporary footage to tell the story.  I think I was a bit dubious before hand, but afterwards I was pleasantly impressed.  It did occur to me though that they had quite a bit of information about the dogs that were with the expedition early in the film and then all of a sudden, the dogs were gone.  The film had a G rating. 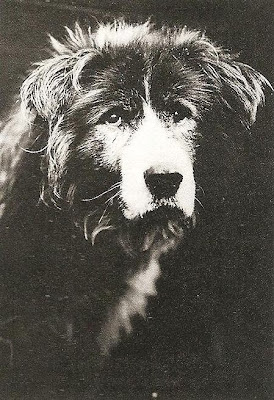 One of the dogs that didn't make it.

Finally I want to mention the subject matter of this book in relation to bookshops.  Many years ago Arctic/Antarctic books were much sought after.  Even this bookseller went out searching for books on Antarctica… not to sell… to read.  All of the secondhand bookshops I knew of had small sections entitled Polar Exploration or something like that.  There are a few shops that have hung on to this great tradition, but most of the newer wave of booksellers seem to have discarded the Polar section… at least that’s my observation.  I know from personal experience that in the last few years, no one has asked me for Polar books and therefore a separate section seems superfluous to me.  It could be that people are now less interested in the Poles than they once were.  I could be wrong.
Posted by robin at 1:12 AM