“In this book we use the term “Home-Style” cooking. In home-style cooking, one is not as concerned about the appearance of the food and fancy garnishes as we are about the taste and nutritional value of the dishes. Although specific amounts of ingredients are stated in these recipes, you are allowed to vary the measurements according to your individual taste. Flavors of foods in home-style cooking vary depending upon the cooking technique used. If you cook the same food using a different technique, the taste will change. The recipes included in this cookbook are completely different from those found in Pei Mei’s cookbooks Vol. I, II, and III. The 120 recipes included in this book are divided according to the type of ingredients used. Dishes included are simple and economical to prepare. Taste is not too spicy, not too mild.” 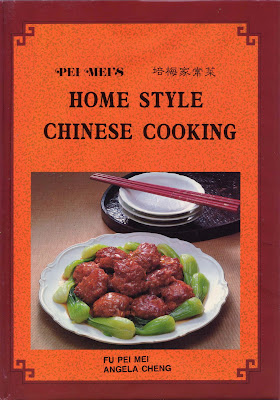 Finding this book was one of those moments in this booksellers journey where the discovery of a new title truly excited and invigorated.  When I pulled this book off the shelf and confirmed that it was another title by Pei Mei other than Pei Mei’s Chinese Cook Book Volume 1, I could barely control my excitement.  I’ve been on the lookout for anything by Pei Mei for a number of years now and have only managed to find many copies of Volume 1… and one other book which from memory was full of Yum Cha recipes… and that’s it.  People that know Pei Mei’s work are always on the look out for Pei Mei’s Chinese Cook Book Volumes 2 and 3… Good luck.  I’ve been actively looking for years to no avail, which is probably why I got so excited to find this title… or any title other than Volume 1. 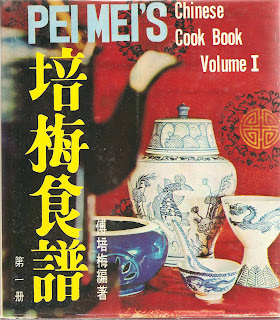 So who was Fu Pei Mei?  Besides authoring elusive cook books, she was a celebrity TV chef in Taiwan who managed to clock up 40 years on the telly before retiring and then passing away (2002 and 2004).  I’ve been assured by Chinese speakers and eaters that she was/is a superstar across the Chinese world including it’s diaspora, which is probably why I find so many copies of Volume 1 of the trilogy here is Australia.  Why I don’t find the other volumes is a bit of mystery that I don’t really understand... a bit like most of this youtube clip:

I’ve attempted a few Pei Mei recipes despite the unappealing photographs that accompany some of the dishes.  This one from Volume 1 was particularly tasty: 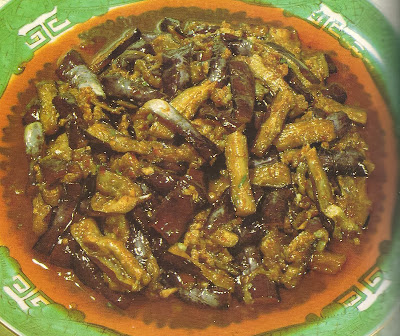 I write quite a bit about cookbooks as they are something that I like, particularly anything unusual, appetizing or of interest.  As most of you are probably aware cookbooks can be a can of worms as they often look great whilst being incredibly unpopular with the book buying public.  Finding a new (to me) Pei Mei title is something that does excite me and fulfills my cookbook criteria (unusual, appetizing or of interest)… and it gives me hope in my search for Volumes 2 and 3.  One day.
Posted by robin at 11:17 PM