Records of the Castlemaine Pioneers.

Records of the Castlemaine Pioneers.  Hardcover book published by Rigby 1972, 236 pages with some black and white photographs and illustrations. 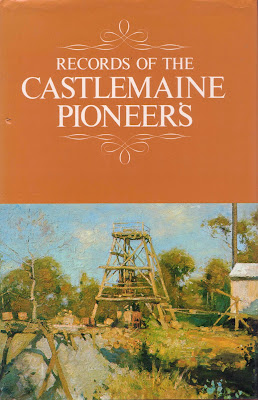 “Every chapter in this book is a true and colourful picture of the uproarious days when Australia was like a great golden magnet. It consists of the recollections of pioneers on the central goldfields of Victoria assembled from the 1880s onwards and here published for the first time.”


Victoria (Australia) was the scene of one of the world’s major goldrushes.  Between 1851 and the late 1860s people came from all over the world to try their hands at gold mining.  An interesting figure is the increase in Melbourne’s population between 1851 and 1854 from 29,000 to 123,000. That’s a big increase in a short amount of time for what was then a small town.  What is even more interesting is that there was no gold in Melbourne (?), Melbourne was just the nearest metropolis to the goldfields… which included Castlemaine.

Not far from where I sit (Clunes), is where the first minute pieces of gold were discovered in 1850 by a Mr. W. Campbell.  He kept this quiet for a while (as you would) but made it public in early 1851 and soon after this there was major mining going on all over Victoria… including Castlemaine, which is not really that far from here.  Any history of any town in this area, usually begins with gold, which is also the reason why you get all those great nineteenth century town halls, banks and post offices in what appear to be sleepy little townships in the middle of nowhere.  Castlemaine is slightly different in that it has maintained a population and size to varying degrees and is still a thriving metropolis compared to many of the smaller less habited towns in the area.

This book is full of first hand accounts of the goldrush and afterwards.  From experience any local history books of this period are popular and Castlemaine being the historic gold town that is, is no exception.  As soon as I saw this book I figured it would be a seller, if not on line, then definitely in store.  Other books and booklets on Castlemaine have done well for me in the past and this one, whilst not rare, is one that I have not found on a regular basis.
Posted by robin at 10:28 PM