Select Extra-Tropical Plants, Readily Eligible for Industrial Culture or Naturalisation, with Indications of Their Native Countries and Some of Their Uses by Baron Ferd. Von Mueller, Government Botanist of Victoria.

Most people here in Victoria know the name Ferdinand von Mueller through his work with The Royal Botanic Gardens, Melbourne, as he had the distinguished honour of being appointed it’s first director in 1857.  This is what I knew him about him when I saw his shiny gold name on the spine… and what a spine it is.  Leather bindings are a real eye catcher and this one practically jumped into my hands before I had even fully digested what it was that I had.  My next step of course was to look around the same location for any other fine leather bindings of any sort.  Unfortunately Mr Mueller was definitely on his lonesome. 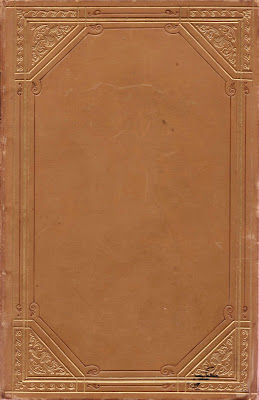 I have seen this sort of binding before, mainly when I worked at the Baillieu library at Melbourne University.  They had rooms full of books bound in this and similar styles.  From what I know these sorts of books from this era were often issued in paperback format (there are copies of this title and edition in paperback, floating around the www), and then bound as per the owners wishes.  I think this was to keep a library including personal libraries, uniform in appearance and I guess that’s why the Baillieu has rooms full of books bound like this. 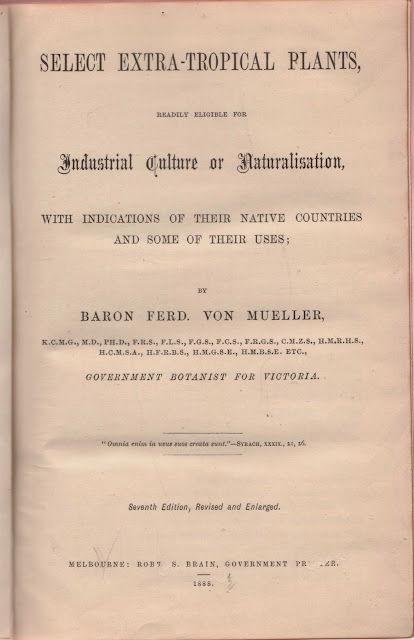 Baron Sir Ferdinand Jacob Heinrich von Mueller was into his plants.  So into them, that he was able to slap together this compendium of useful information about Extra-Tropical Plants, probably with one hand tied behind his back and the other hand busy weeding his own garden, whilst overseeing the Botanical Garden.  You wonder where he got the time, but I guess if someone isn’t updating their facebook profile or watching cat videos on youtube, then there is plenty of time to write a book.


Von Muellers busy, facebook free, schedule also lead him to Clunes where he “aided the establishment of the plantings” in the park (I can see some of his “plantings” from where I now sit).   I don’t know if he made it here personally or just sent some plants, but what I do know is that Clunes is not “Extra Tropical” in climate* which is what the plants in this book are.

* Global warming may change this.
Posted by robin at 12:54 AM