Struggletown: Public and Private Life in Richmond 1900-1965 by Janet McCalman.

Struggletown: Public and Private Life in Richmond 1900-1965 by Janet McCalman.  Hardcover book published by Melbourne University Press 1984, 325 pages with some black and white photographs and one black and white map. 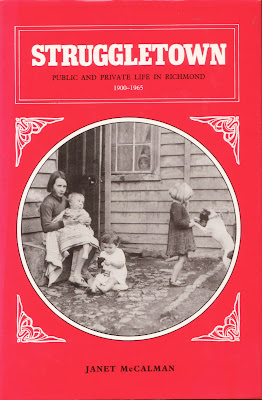 I’ve never lived in Richmond.  I do know plenty of people that have lived there and most of them have thoroughly enjoyed it, maybe even patriotically thoroughly enjoyed it.  Me, I’ve never been tempted, especially now that I’ve left the big smoke for the rural ideal.  But it’s still a place that I visit often when I am in the big smoke as I’m particularly fond of Vietnamese food and there’s nothing that this bookseller likes better than a big bowl of Vietnamese soup after a long hard day of book hunting.

This book has nothing to do with Vietnamese soup or me… or any of the people I know… as none of these have anything to do with Richmond pre 1965. The book does have everything to do with the working class social history of Richmond which if you’re not from Australia I should clarify that Richmond is an inner city suburb of Melbourne, Victoria.  As with many inner suburbs, Richmond has a long and interesting history* and despite its recent gentrification still maintains a very working class ambience.

As a lot of people have lived and loved in Richmond and it has that long history, it’s not surprising that a book such as this exists… and not surprising that this bookseller picked it up.  I figure that most people are like myself in that they are interested in where they live or have lived in the past (I could wrong about this).  What’s the story behind the Skipping Girl Vinegar sign (not mentioned in this book), the Nylex clock (not mentioned in this book) or the Pelaco sign (is mentioned in this book) and what’s the story behind all those other Richmond bits and pieces… actually the book is a social history so it’s more about the people and less about the signage, but the people are interesting as well and life isn’t just about advertising signage.