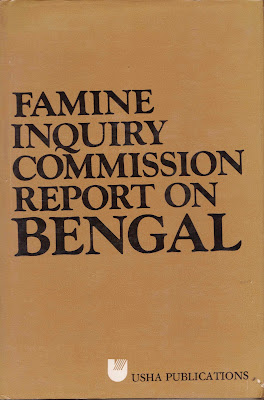 “The Bengal famine of 1943 stands out as a great calamity even in an age all too familiar with human suffering and death on a tragic scale. With its toll of more than one and a half million deaths due to starvation and epidemic diseases, it left weeping sores that took years to heal. The famine, rightly termed as 'rice famine' in the context of the food habits in Bengal, affected mainly Bengal and the neighbouring province of Orissa only marginally, And it affected only the poorer classes in rural areas who lacked the purchasing power.”

Really, this book is a bit a downer. Just flicking through the pages is a downer.  I’ve visited West Bengal on a number of occasions and it’s a wonderful place full of (mostly) wonderful people, which is one of the reasons I have visited it on a number of occasions.  I’ve often recommended it to other travelers but it is one of those places that seems to be unable to shake the reputation of being home to the “starving millions” of India.  Rather guiltily, I’m happy to say that I ate some wonderful food whilst there, which to be honest is the benchmark for a lot of other Indian food that I have enjoyed (or not) over the years. Even know I start to salivate whilst thinking of the Dal Fry at the Khalsa restaurant just off Sudder Street in Calcutta*.  But I rather inappropriately digress, West Bengal and that part of the world has often suffered from famine. This book refers to the 1943 famine and the idea behind the report was to:


1/ Report on the famine


2/ Report on the health aspects of the famine


3/ Consider “the problems of procurement, rehabilitation and supply of protective and supplementary food for the immediate future.”**


Point three is an excellent idea for a report on anything at all resembling the calamity that took place in Bengal and is an excellent reason for a book such as this to not only exist, but to be reprinted so many years after the fact.

“Those who cannot remember the past are condemned to repeat it.” George Santayana


Whilst writing this blog entry I was reminded of another famine in 1974 in what is now Bangladesh, which was once part of Bengal, and I had a quick read of the Wikipedia article on that famine.  I was shocked but not surprised to read the following:


“The second failure was external: the US had withheld 2.2 million tonnes of food aid, as the then US Ambassador to Bangladesh made it abundantly clear that the US probably could not commit food aid because of Bangladesh's policy of exporting jute to Cuba. And by the time Bangladesh succumbed to the American pressure, and stopped jute exports to Cuba, the food aid in transit was "too late for famine victims"”

“In terms of total mortality, though figures vary, one scholar estimates 1.5 million deaths as a reasonable estimate.” ***


“Those who cannot remember the past are condemned to repeat it.” George Santayana

* The city was called Calcutta at the time.  It’s now called Kolkata.
** Publishers blurb.
*** The same Wikipedia article as above.
Posted by robin at 1:22 AM