The Voyage of Torres: The Discovery of the Southern Coastline of New Guinea and Torres Strait by Captain Luis Baez De Torres in 1606 by Brett Hilder.

The Voyage of Torres: The Discovery of the Southern Coastline of New Guinea and Torres Strait by Captain Luis Baez De Torres in 1606 by Brett Hilder.  Hardcover book published by University of Queensland Press 1980, 194 pages with black and white maps and illustrations as well as a few colour maps. 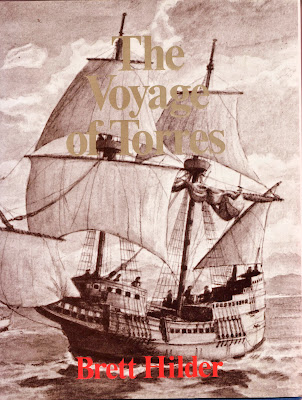 “For many years people have speculated about Torres’s voyage of discovery along the southern coast of New Guinea and through what is now called the Torres Strait. Which passage did he use through the strait? Did he see the mainland of Australia? Which islands did he stop at? The brief report Torres sent to the king of Spain after his two small ships reached Manila in May 1607 is tantalizingly vague and ambiguous. The narrative of Don Diego de Prado, an aristocratic adventurer who sailed with Torres, is more detailed but still has frustrating gaps and allows for differences in interpretation. Both these documents were lost to the world for hundreds of years after the voyage. Since Prado’s narrative was published in 1930, other clues have come to light from old maps thought to have been based on missing charts drawn by Prado, from documents previously overlooked, and from the discovery that two important lines had been omitted from the transcription of Torres’s letter to the king. Captain Brett Hilder, who has spent fifty years as a navigator in the Pacific and has crossed and recrossed the track of Torres many times, gathered together all the clues now known and set out to establish the day-by-day route of Torres from his landfall in the Louisiades to the end of his voyage in Manila. He was helped by his knowledge of the area, of its tides and currents and winds as well as the problems of navigation presented by the innumerable reefs and shoals and coral islands. The result is a fascinating piece of detection. Though some people may still disagree with his conclusions regarding the more controversial areas, they will not fail to be impressed by the care and thoroughness of his reconstruction of the voyage, which in itself is an engrossing story of exploration and discovery.”

I’ve never really given that much thought to Torres.  I’m not even sure that I’ve given any thought to the guy or ever heard anything at all about him.  Who is this guy?  Well it didn’t take this rocket scientist very long to figure out that he was a guy who sailed between Australia and New Guinea and then had that body of water named after him at a later date.  There’s one little problem with what I’ve just written and that is that he may not have been aware that he was sailing between Australia and New Guinea as he failed to mention anything anywhere about the Australia part of the Torres Strait.  As far as history goes, all we know is that he saw some of New Guinea.*  … and that’s where this book comes into the equation.  The author, a ship captain, delves into the murky world of old maps and journals and comes up with some controversial and interesting ideas.  But from what I can gather, there is still a lack of hard evidence.


"Here there are very large islands, and more to the south"
(Translation of Torres’ report to the king.)

Here in Australia we tend to hear quite a bit about the British discovery of Australia and a little bit about the Dutch… maybe a smidge about some of the others.  This probably has to do with the British planting of the flag, the colonization of the country by British convicts and the wars that Australia fought on behalf of the British.  It’s not that surprising that I’m not up to speed with my Torres knowledge considering the historical British bias.  It is an interesting thought that we could have been speaking Spanish instead of English… but I’m not the first to speculate about this sort of thing… and I’m sure I wont be the last.

So a book about Torres’s adventures and the possibility of his sighting of Australia a bit before Cook, is an interesting proposition… at least I think it is.  The what ifs? and the maybes are quite fascinating.  What I think is more “of interest” though, is why the Spanish didn’t do more with New Guinea.  Apparently Torres claimed bits of it and the Spanish knew about it even before he got there.  Reading the Wikipedia article on New Guinea, there doesn’t seem to be much information about this part of history.  There are probably other books and on line information about this that don’t really fall into the scope of this blog entry, but it’s something to briefly think about.

*A bit like asylum seekers seeking to come to Australia.
Posted by robin at 3:20 AM