The Secret Life of Dust: From the Cosmos to the Kitchen Counter, the Big Consequences of Little Things by Hannah Holmes.

The Secret Life of Dust: From the Cosmos to the Kitchen Counter, the Big Consequences of Little Things by Hannah Holmes.  Hardcover book published by John Wiley & Sons 2001, 240 pages. 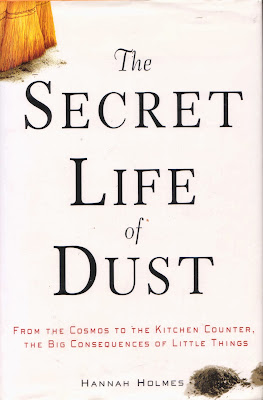 Have you ever seen dust up close?  As a bookseller, I have seen a bit of dust over the years and some of it has even managed to get up my nose.  It’s not uncommon for booksellers, that includes me, to sneeze whilst processing books through the many stages they go through before selling them (selection, cleaning, selling etc).  Yes even this hardened bookseller has been known to unavoidably have the odd “convulsive expulsion of air from the lungs through the nose and mouth”*, whilst working with books.


I do like the idea of this book with all it’s dusty information.  According to the author this planet is made of the stuff.  Now that’s a scary thought.  Dust is the thing of shelves, furniture, knick-knacks and basically any surface that hasn’t been wiped in the last few minutes, it not something that I associate with this rock, but I’m not a dust expert and if I think really hard about it… yeah, I guess I do get the idea that everything (and I mean everything) can be dust.  But the book doesn’t just cover the cosmos, it also looks at dust at a more local level including book lice and Pseudoscorpians.

“In addition to mites, these carnivores eat book lice and flea larvae, and when the chips are down, they eat one another**.  Larry Arlian, the dust-mite man, finds predatory mites such ferocious hunters that he’s forced to position his dust-mite cages inside moats of oil and to grease the sides of the cages with petroleum jelly. Regardless, these bloodthirsty animals will sometimes break into a cage and begin devouring the experiments. And like the dust mites they kill, these predatory mites may also produce allergenic dusts. “Pseudoscorpions” are equally savage hunters. And they look the part. They’re crab-shaped, armed with long claws, and visible to the naked eye. The book scorpion is one of this clan. In a dark crevice, such as the black canyon between books, it awaits the innocent dust mite or book louse that might pass by. And then it pounces, claws slashing.”  Page 186

Now I feel itchy… and a bit creeped out.  This sounds like there’s an active food chain happening right behind me, which is something I don’t want right behind me.***  And I thought H.P. Lovecraft was scary, this is real horror show and to think some of this stuff is getting up my nose.  Yuck.  I guess it’s all part of the food chain… including me.

** A bit like booksellers.
*** I dust and clean all the books I sell as best as I possibly can.  I also take other precautions to avoid insect damage and so far there hasn’t been any problems here at the home of Huc & Gabet.
Posted by robin at 3:07 AM