Jane Fonda's War: A Political Biography of an Antiwar Icon by Mary Hershberger. 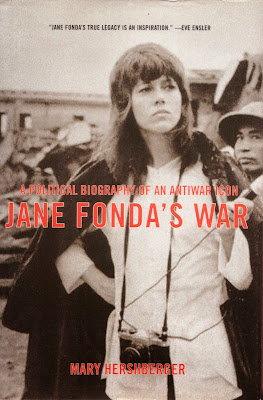 ““What she said got about as much attention as Leonid Brezhnev” quipped an insider in the Nixon administration. … Jane Fonda’s War recounts the evolution of Fonda’s politics leading up to her bold antiwar stance. It charts the obsessive interest with the actress on the part of the Nixon government and the dirty tricks that were employed against her, including pressuring the Justice Department to charge her with treason. It follows Fonda on her controversial visits to Hanoi, and it documents the fury these trips provoked, among many Americans, an anger that still finds an echo today.  Based on unprecedented access to Fonda’s twenty foot thick FBI files, interviews with former prisoners of war who met with Fonda in Hanoi in 1972, and a broad range of contemporaneous press reports, Jane Fonda’s War is an essential complement to her own story and an important corrective to pervasive rightwing mythmaking.”


For those of us (myself included) who are too young to remember, Jane Fonda was not a friend of the Vietnam War. Yes, it’s hard to believe that this woman…

… was/is not only the exercising behemoth that she was/is, but was/is a political dynamo, feared by Richard Nixon and was/is someone who was/is not afraid to say what she thought.  …oh yeah, she was also an actress.


Here in Australia, a lot of Jane’s political activities seem to have not received much press, or maybe it’s just that I haven’t noticed up till now.  Reading through her entry in Wikipedia I was pleasantly surprised to find that she didn’t just stop at the Vietnam War, but has continued her activism… and her exercise videos.  The problem though is that Jane’s political activity whilst obviously of great importance and in some instances of historical importance, it is not so well known (or feared) here in Australia.  A book like this one whilst fascinating and I’d even go so far as to say of great importance, would probably not be as popular here as a book about the making of Barbarella.  Popular culture tends to be of more interest here in Australia than US radical politics.  In other words, i think this book will be a hard sell.


Jane Fonda's War was published soon after Jane’s autobiography “My life so far”.  I think the intention was to ride on the back of the other book, which had received a bit of attention, by focusing on a particularly controversial period of her life. The interesting thing about this book as apposed to Jane’s book is that this one wasn’t written by Jane and those twenty foot thick FBI files on her activities would probably have some information she failed to mention in her biography.
Posted by robin at 2:52 AM