Fates Worse Than Death: An Autobiographical Collage of the 1980s by Kurt Vonnegut.

Fates Worse Than Death: An Autobiographical Collage of the 1980s by Kurt Vonnegut.  Hardcover book published by Jonathan Cape 1991, 240 pages with a few black and white photographs. 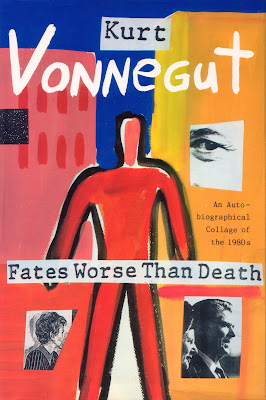 It was many years ago that I was reading as much as I could possibly find of Kurt Vonnegut’s work in a very short space of time.  I’m pretty certain that I ended up finding and then reading one of those Heinemann Octopus anthologies containing six individual titles “complete and unabridged”.  I think I even read them back to back, which is not something I would normally do, but from memory I was enjoying Kurts works so much, I just couldn’t stop.  At the last page of the Omnibus, I felt saddened that that was all. I had no more.  Needless to say I got over my disappointment and moved on and rather strangely haven’t read any other Kurt Vonnegut books since then, although I have often contemplated revisiting the titles that I have read… and I’ve even  toyed with the idea of reading something of his that I haven’t read.

Kurt Vonnegut is one of those writers along with Philip Dick, Herman Hesse and others, where it is not only difficult to find good quality second hand copies of their work, but when you do find them, they are often in poor condition.  To me this is a good sign in that people are obviously reading these authors and keeping their books not Dan Browning them*, and when they are finally moved on, they have been read and read and read again which is why they are so battered and bruised.  … of course as a secondhand bookseller, this is really bad as everyone wants these books and I can’t find them in a good enough condition to sell.  What appeals to me, is that people are obviously as passionate about some of these writers as I am.

This book is a later title by the now sadly departed Kurt and is a collection of previously published autobiographical articles.  In the absence of finding any classic Vonnegut titles, this one will do.  I’m sort of intrigued by this collection, but to be honest if I had a choice between reading Slaughterhouse 5 again or reading Fates Worse than Death, I think I’d read Slaughterhouse 5 again… but that’s me being a bit nostalgic for the past… present… and future.  Let’s just hope I get around to reading it before a Tralfamadorian test pilot accidentally destroys this universe.

*Discarding them immediately on completion as evidenced by the large numbers of secondhand copies of whatever the latest Dan Brown book is at the time.