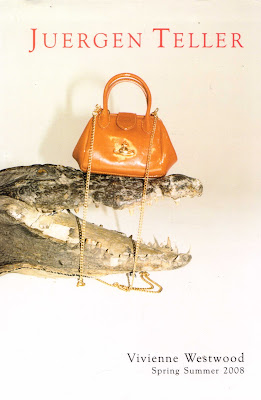 This book is a collection of photographs of Vivienne Westwood designs/creations from her Spring Summer collection of 2008.  Juergen Teller… well he’s a fashion photographer, which is why he’s photographing Vivienne Westwoods fashions.  Excuse my ignorance, but I didn’t buy this book because of Juergen… I’d never even heard of the guy (…should I have?).  It was Vivienne Westwoods name that jumped out at me whilst perusing through a mountain of books.  Now some of you may be a bit surprised to read that I’m not a fashion conscious sort of guy and therefore I don’t pay much attention to catwalks or fashion photography and I just want to clarify that it’s not that I don’t appreciate fashion, it’s just not my thing.  Vivienne Westwood is someone I know of mainly through her Punk connections and the fact that she was in a long term relationship with Malcolm McLaren… which was all a very long time ago and I’m sure she’s done lots of other things since then, particularly in the fashion world… but as I just wrote, it’s not my thing. 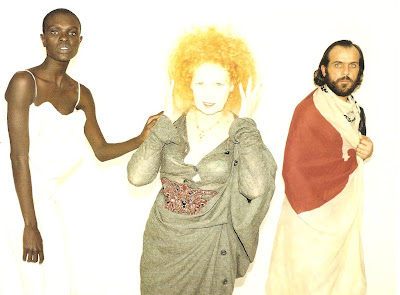 That’s Vivienne in the middle… and that’s not me on the right.
So as I was writing a brief description for an ebay listing of this book, I remembered reading about Malcolm McLarens funeral a few years ago.  At the time of his passing, I had a look around on the interwebs and found no images or video of the event.  So my brain being jolted by Vivienne and her 2008 collection, I figured it was time to have another look for Malcolms funeral and surprise surprise I found this: http://www.youtube.com/watch?v=doyFssxPnzs
No, in itself it’s not the best thing I’ve ever seen on you tube, but still it does give an idea of the event.  My favourite bit was the front of the bus having “Nowhere” as it’s destination… that’s a cultural reference… if you don’t get it… well… where were you in 1977?
Anyway, back to Vivienne.  The photos are great and the fashions look wonderful… at least I think they do.  Personally though, I can’t see a wardrobe change happening here at Huc & Gabet in the near future.
Posted by robin at 9:56 PM