Making a Transistor Radio (A ladybird “How to make it” book) by G.C. Dobbs.

Making a Transistor Radio (A ladybird “How to make it” book) by G.C. Dobbs.  Hardcover book published by Wills & Hepworth 1972. 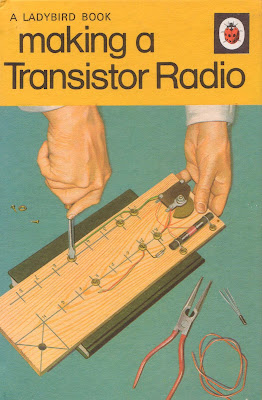 Do you remember the good old days when we listened to the radio… on a radio, not on the internet?  I’m of an age when I do remember the old transistor radio.  I even owned one when I was a young boy.  It was a Christmas present and boy did I feel special being able to listen to all that great 1970s music… oh yeah… I was cool (true).  One thing I didn’t do was make my own radio.  For some reason Santa decided that the Japanese could do a better job at making a Transistor radio than I could.  I think he might have been right.  Instead I got a basket making kit… it wasn’t much fun.
This book, part of the classic Ladybird imprint, shows you how to make a transistor radio… although mine did look very different to anything that is pictured in this book.  Thinking about it though, isn’t making a transistor radio making a little complicated for the readers of Ladybird books… or maybe this is just my thinking and any 6 to 10 year old, other than myself at 6 to 10 years of age, is/was more than capable of making a radio.

This particular copy is in great condition, which sort of leads me to believe that it wasn’t actually used or overly read.  Maybe whoever originally owned it decided just like Santa that the Japanese could do a better job.
Posted by robin at 1:11 AM