The First Crusade by Steven Runciman. 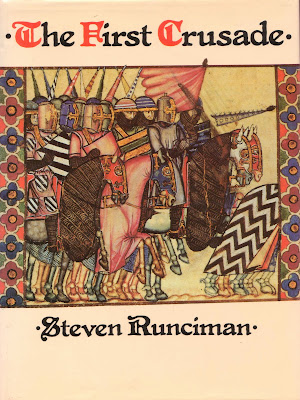 “When Pope Urban II rose to his feet to address the multitudes gathered before him at the Council of Clermont in 1095, his appeal was simple: let Western Christendom march to the aid of their brethren in the East. The enthusiasm with which his call was met was overwhelming and extraordinary.”

A number of years ago I acquired a lovely worn and aged 3 volume set of Runciman’s A History of the Crusades*.  Not surprisingly and not unpredictably, I then read all 3 volumes over a number of months, with a break between each volume.  I seem to remember the break was intended as a bit of a rest in between page after page of bloody confrontations between Europe and the Middle East.  I don’t remember all the gory details and at the time I figured it wasn’t that important to remember everything.  What I felt was important was to get a general idea of the whole thing.  I do remember that there was lots trickery and nastiness and that behind all the religious zeal there was lots of other stuff that had very little or nothing to do with the Holy Land.  Probably the one event that shocked me the most was the Childrens Crusade, of which according to some, Runciman may have got the wrong end of the stick.

“Steven Runciman gives an account of the Children's Crusade in his A History of the Crusades. Raedts notes that "Although he cites Munro's article in his notes, his narrative is so wild that even the unsophisticated reader might wonder if he had really understood it."  Wikipedia


“Unsophisticated reader”… that’s me.  If you look around on the interwebs, people do say nice things about Runciman but there are also questions about how accurate his meisterwerk is.  Whether all or part of Runciman is accurate, there’s enough in his books to give an idea of some wild and crazy times not all of which were as Kosher as some would like to think.


This particular book dealing only with the first crusade is a little more glossy… OK, it’s a lot more glossy… than any of my volumes.  The illustrations do add to the text and it is nice to be able to look at the images relating to the events.  This particular edition is a Book Club edition, which doesn’t detract from the overall appeal of the volume.  Sure, it would be nice to find a lovely vintage three volume set such as the one that sits comfortably on my personal shelves, but until then this Book Club edition of the first volume will do.


The Crusades are without a doubt an important part of world history, which is I guess why I read Runciman in the first place.  Whether others are in interested in the blood and guts of many years ago, I don’t know.

*Cambridge at the University Press 1954.