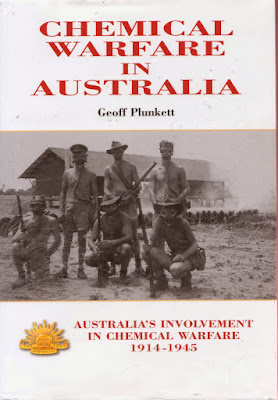 “This meticulously researched book unearths a sixty-year secret. As the Japanese swept south towards Australia in late 1941, they carried with them chemical weapons, already used with deadly effect in China. Forced to counter the chemical warfare threat, Australia covertly imported about 1,000,000 chemical weapons — including 16 types of mustard gas — and hid them in tunnels and other sites around the country. This book tells the story of the importation, storage and ‘live trials’ of the deadly weapons. It reveals details of the chemical warfare agents themselves, Australia’s retaliatory plans, the involvement of the USA, the training of the weapon handlers and, finally, the dangerous disposal of the volatile agents.”


I guess we all knew that chemical weapons weren’t invented by the Syrians.  Saddam Hussein used them not that long ago.  Under International Law it has been illegal to use chemical weapons since 1899*… but obviously the memo never reached Syria… or the United States, Russia or North Korea, four countries that we know still have stockpiles of chemical weapons.  They mightn’t be using them at the moment, but given half a chance… and if they aren’t going to use them, then why have them?

1899…mmmm.  This book looks at “Australia’s involvement in Chemical Warfare between 1914 and 1945”.  Obviously the memo didn’t arrive here either… or if it did, it arrived a bit late.  Before anyone starts messaging me with comments about the wars and Australia being “forced”… or as a deterrent against more recent threats… I am more than willing to admit that this is a complicated subject and one that I am not really au fait about.  But…1899?  That’s a long time ago and there has been plenty of time for everyone to put out the trash.


Geoff Plunkett has written a truly detailed book on this subject.  I guess if you’re going to write about it you should do it properly.  Despite the detail and depth, I can’t imagine this book becoming as big a seller as any book on Gallipoli or Kokoda.  Were there any heroes involved in Australia’s chemical warfare projects?  Somehow I think there are no heroes or winners when it comes to chemical warfare, which is probably why Australia’s involvement remained a sixty-year secret.