The Goodies Rule Ok by Robert Ross.  Hardcover book with pictorial boards published by ABC Books 2006, 192 pages with colour and black and white photographs as well as a few illustrations. 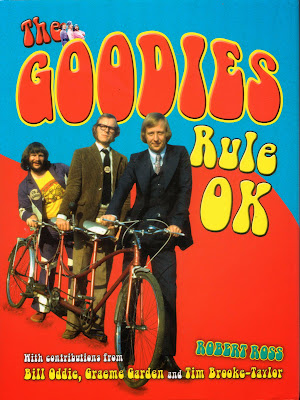 I remember watching the Goodies back in the 1970s on ABC TV here in Australia.  It was the highlight of my day.  There was the giant kitten thingy, the Rolf Harris’s and general all round mayhem, episode after episode… and they were repeated… and repeatedly enjoyed as often as possible by moi.  I knew that with each viewing, I was always going to be entertained even if I didn’t understand all the angloisms.  It was great… and it was even better because my parents didn’t like it… which was probably due to their having even less of an idea about the anglocentric humour of the Goodies than I did.


The Goodies are still popular with my generation and those generations around my generation.  Video and now DVD (probably the interwebs as well) have kept the Goodies alive and kicking despite their not having made a new episode since 1982.  At a guess, I would say this popularity is mostly driven by nostalgia and this book is a prime example of that nostalgia.  Published in 2006, long after the fact and published in Australia, it’s obviously been put together to appeal to older fans who remember the Goodies with fondness.  It’s got lots of stuff that any fan who has been waiting for something new for the last 31 years, would thoroughly enjoy.

Now for the truth.  My passion for all things Goodie has waned.  I now sound like my parents… “What is this rubbish”.   I don’t know why, and indeed, I’m a little saddened by the fact that I don’t find them as funny as I once did.  The angloisms are a little clearer to me now… but… I don’t know, it’s just not as funny as it was when I was 12.  I know a number of people to whom the Goodies are still of interest and I think that’s great… and I think a book like this should appeal to them and the thousands of other fans who still sing along to the Funky Gibbon.  For me though, The Goodies no longer Rule Ok.
Posted by robin at 2:54 AM