America Over the Water by Shirley Collins.

America Over the Water by Shirley Collins. Hardcover book published by SAF Publishing 2004, 222 pages with some black and white photographs. 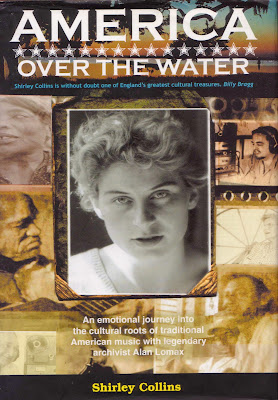 “At the age of nineteen, Shirley Collins was making a name for herself as a folk singer. Whilst attending a party hosted by Ewan MacColl she met the famous American music historian and folklorist, Alan Lomax. They became romantically involved, and before long, Collins found herself boarding the SS United States, to begin an adventure almost unheard of for a young English girl at the time.”


I can’t remember exactly where I first heard about Shirley Collins*, but I do remember the first time I actually heard her.  I had ordered a copy of her collaboration with legendary guitarist Davy Graham entitled, Folk Roots, New Roots and it was a bit of a punt as I didn’t really have any idea of what it would sound like.  I remember that whatever I had heard about it, was enough to pique my interest and therefore worth taking the risk.  (Today of course, I would go to youtube and have a listen, but this was a few years before youtube became the powerhouse of listening and viewing that it is today.) To this day Folk Roots, New Roots remains one of my all time favourite listening experiences.  It was and still is a true revelation and is an album that I often revisit.  I find Shirley’s voice difficult to describe, I guess there’s a sort of polished naivety to it… maybe that’s not quite right.  She sounds amazing.

I wasn’t aware of this books existence until I read Shirley’s name on the spine.  It was one of those things where I nearly didn’t venture any further than a quick glance as I thought it must be a different Shirley Collins… maybe a sister of Joan and Jackie.  Boy, was I pleasantly surprised.  I was aware of Shirley’s exploits with Alan Lomax and as strange as this may sound, I have often wondered what it must have been like travelling around collecting and recording the music that they did, when they did.  And here’s the book on exactly that subject.  The title is a twist of an oft repeated question/comment made to Shirley by various people in the United States when she told them she was from England. “England over the water?”  But the book doesn’t just look at her time in the United States as it has quite a bit about her early life in Hastings.


Being a fan of Shirley’s, I couldn’t resist reading this book before offering it up for sale.  I loved it and it was definitely worth the read.  I think that here in Australia, Shirley’s fan base is quite limited and so far the book hasn’t sold.  I don’t regret buying it and I feel good about trying to sell it.  The question is, am I alone in my interest? ... and what's the story behind that dress?

*Possibly a magazine article.  The Wire?
Posted by robin at 1:23 AM