The Teachings of Osiris: Set down in the House of El eros-El Erua, they being male-female, born according to the laws governing the Dhuman-Adamic race, this being their fourth incarnation.

The Teachings of Osiris: Set down in the House of El eros-El Erua, they being male-female, born according to the laws governing the Dhuman-Adamic race, this being their fourth incarnation.  Hardcover book (no dust jacket) published by Rider & Co. (no date, late 1920s?), 135 pages. 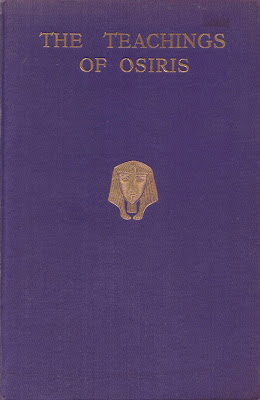 According to Peter Miles, who wrote the introduction, this book was produced by “clairaudient dictation”, which is probably why there is no author listed.  Clairaudient dictation, now there’s something you don’t read about everyday.  I’m not 100% jiggy with the whole clairaudient thing, but I think it’s the same or it’s a very similar to Channeling.  I’ve sold a few Channeling books over the years and there are a few authors/channeled entities that I do look out for.  Again, it’s not my thing, but it is the thing of many others.
So who was Osiris? Well he was (is?) an Egyptian god usually associated with the afterlife.  The tiny picture on the front cover might just possibly be this Osiris fellow, who might just possibly be the author of this book via the clairaudient dictation thingy.  Whoever it is, it is certainly not Peter Miles.  So who was Peter Miles?  The interwebs hasn’t been able to give me the quick answer I was hoping for (unlike the quick answer re Osiris) and delving a little deeper… I still have no answer, so I’m going to go out on a limb here.  I reckon there’s a good chance that Peter Miles was the person who was involved in the clairaudient dictation and some of us skeptical non believers of clairaudient dictation, may even go so far as to say, that he was probably the author of this book.
So what is this book all about?  The contents read like a what’s what and who’s who of the paranormal world of the 1920’s, which is by the way, when this book was dictated (all of the entries are dated).  The contents include: Spiritual Success; Law of Attraction and Repulsion; Dual Life; Reincarnation; Spirit; Astral Rays; Subconsciousness Mind; Magnetic Attraction; Egyptian Existence; Ectoplasm; Manifestations; Cosmic Consciousness; Religious Rites; Osiris-Isis; Book of Knowledge; Teachings.  I’m not going to go into what all these things are as there are others out there who can write a better biased or non biased explanation than I can ever possibly cobble together from Wikipedia.  The fact that there is a chapter on Ectoplasm does date the book a little (… no, I’m not an ectoplasmic expert).  Apparantly ectoplasm is not as common as it once was and some people doubt that it ever really existed...?  If you look around on the interwebs you’ll find some great pictures.
Here’s what Osiris had to say about ectoplasm:
“Ectoplasm is a magnetic substance which is invisible to the physical eye unless it be trained to receive its vibrations ; as thou dost know, the centre of the ectoplasm is toward the lower part of the chest.  This is attracted out of the medium’s physical body by the absorbing vibrations of the spirits who are to manifest.  The mediums generally have an abundant supply of ectoplasm.”
This book is a very strange and peculiar thing.  A little dated and possibly a hard sell, but still an interesting curiosity.
Posted by robin at 1:04 AM